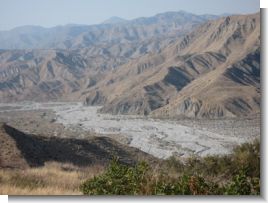 Angie:
Jason woke me about 2 am to the smell of smoke and what looked like haze coming over the ridge we were camping. We scrambled to get us and all of our gear packed up and ready to go and proceeded to do a fire drill in the middle of the night down 2 miles to the valley bottom. Turned out to be a false alarm, thankfully. So, once we calmed down enough we managed a couple hours of sleep before being awakened by another hiker (who we woke up coming down the hill in the wee am hours) getting an early start to the day.
I was very glad to start early today since it was already 90 degrees by the time 8 am rolled around. Ouch. By the time noon rolled around it was 95 degrees in the shade. Jason tells me this is the temperature we should report since that's the air temperature. Air temperature, smare temperature. The thermometer left in the sun read 125 degrees. Since we were left in the sun all day with literally no shade -- none -- I'd say we felt more like that thermometer. This made the day, eh, challenging. The best part of it was the end after reaching Whitewater creek and soaking our feet in the (somehow) icy cold water running about 5' across. A very welcome site indeed.
We had some more trail magic today. The Garcia Family from the area left a huge cooler full of cold, cold water at a much appreciated spot walking across San Gorgonio Pass. And the Mesa Wind Park employees were super nice and let us take water and bask in the wonderful A/C of their lunchroom. My hats off to both parties.
Jason:
OK, it was scary. I thought that I had been smelling smoke on and off for a couple of hours as I lay awake in the dark. I could see the stars and I didn't see any unusual light along the ridge upwind, so logically I knew if there was a fire, it wasn't close. But that smell made it impossible to sleep. And then it got stronger. I woke Angie and asked her if she smelled it and she did, so we waited and watched. And then the stars along the ridge began to disappear behind a now visible haze. The hot wind was blowing between 10 and 15 mph down the ravine that we were camped in, so even tho the fire would have had to climb down, it would have done so at a reasonably fast clip. At the point that we could visibly see the haze, we decided to pack up and go.
As Angie says, we night hiked 2 miles down to the bottom of the mountain and then threw a tarp on the ground and got a couple more fitful hours of sleep. We aren't sure where the fire was, but the haze from it was hanging over San Gorgonio pass all day as we hiked.
San Gorgonio pass is where I-10 passes between Mt. San Jacinto and Mt. San Gorgonio. It is essentially a giant flood plain created by the runoff between the two mountains. We went through it early morning. There isn't a constructed trail there and instead you follow the blazes along the plain. Enough hikers had gone before us tho that the trail was easy to follow.
The Mesa Wind Park is really, really cool. Over 400 windmills generating lots and lots of electricity on this little ridge. I wanted to talk to the operators about it, but they were taking off to do some maintenance when we walked up. They told us to make ourselves at home in their lunchroom and to take the bottled water from the fridge. That's because their well was discovered to have uranium contamination back in 1994. Angie didn't read the sign about not using the water before washing her face and she positively glowed after the cleaning. :-)
Climbing into the San Bernadinos has been really tough. There is absolutely no shade anywhere. All of the shrubs are knee high or shorter with only an occasional spindly scrub oak casting a measly shadow. Normally when I take a second for a breather, my legs will recover enough to hike on. Something about the super-dry air and the heat is killing my energy tho. Now my legs feel even more tired after the breaks than before. And this is just the beginning of the climb. We bottomed out at about 1200' at the pass and we'll climb back up to 8000' over the next couple of days. Maybe it will cool off.
Many, many thanks to the Garcia Family for their wonderful water. It was sooo hot as I topped the ridge. I couldn't believe my eyes as I saw a huge white cooler sitting in the middle of the desert off to the side of the trail. Making my way down to it I kept repeating to myself, "You've got to be kidding. It can't be a cooler." It was and it was full of water bottles packed in ice. There was a sign on it cheering us thru-hikers on and saying that it was from the Garcia Family. They left markers and poster boards so that the hikers could leave their comments. I left a note telling them that brain-freeze had never felt so good.
OK, I'm completely drained from the heat today. Time for bed.