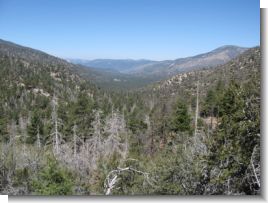 Jason:
We hiked the most miles that we've hiked yet. A 21 mile day. Wow! What a difference from yesterday.
We were up at 5am and broke camp before 6. The day started like yesterday ended, but with a bigger climb. We headed up 1200' to a stream where we watered up knowing that we had 16 miles to go before next water. It was only 3 miles to the stream, but when we arrived we were nauseous and weak. After going to the bathroom, it was clear that I was quite dehydrated, so we forced ourselves to eat and drink even tho it was the last thing either of us wanted to do. Then we continued to climb.
The change was incredible. Within 1/2 hour both of us were feeling much, much better. I'll remember not to let myself get that dehydrated again. It also helped that we left the burn behind and entered the pines and larger oaks.By lunch our appetites had returned and we ended up eating two of our lunches.
Once we hit 8000' elevation, the trail smoothed and we spent the day ranging between 8600' and 7800'. Tho we went up and down quite a bit, the grade was really nice, so we made really good time. Angie made double time at one point when she heard a rattle, looked down and saw a rattlesnake coiling itself getting ready to strike. I heard the yelp behind me and saw her running up the trail towards me.
We also had a surreal moment today when we were walking along the trail behind some houses, looked over, and saw two grizzly bears in cages. They were very pretty creatures, but one was doing the caged animal pace, so it was a bit sad. Someone later said that they were used in movies.
Finally, we had a bit of trail magic today. Angie had been talking about having a rootbeer all week. While walking along the trail, a water cache appeared to the left and there, next to the cache, were two cans of rootbeer. They were in the shade, so they were even a bit cool still. We left a nice note for the trail angels and enjoyed the rootbeers immensely.
Camp tonight is much nicer than last night. I don't feel nearly as tired as last night even tho we walked 21 miles.
Angie:
We headed into San Bernadino National Forest after the first couple of miles today. I LOVE the forests. It's great to be back in the good smelling pine. I sat with Jason under a huge pine as we ate our lunches. I'm not sure why I didn't spend time laying underneath of trees in my "real" life, but hope to remember to once I have to get back to it.
The rattlesnake I'm not sure was getting ready to strike -- I didn't stick around long enough to find out. The only thing I knew was that it was within striking distance and I heard sSsSsSsSsSsS. The sound I made I can't really put into letters. ;-)
The 21 mile day actually felt easier than a lot of 16 mile days we've had. The tread was smooth with only a handful of climbs. My body is starting to feel strong (even if I still walk a little on the slow side) and that's a fine thing.