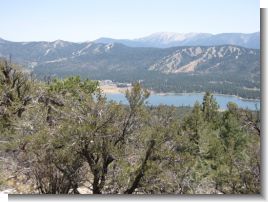 Onward with the new filter

We hit the outfitters as soon as they opened, at 10am, and bought ourselves a new water filter. We'll see how well it works, it's an MSR filter which is supposed to be easy to take apart in the field if you need to fix something. The woman who owned the outfitters was very helpful and nice and took our picture to add to their wall of thru-hikers.

After packing up at the resort and checking out, we called a cab to take us to the trailhead. We figured this would be the easiest way to get back up the not-so-well-traveled Van Dusen Canyon Rd. The cab driver was a pretty cool lady, but she informed us on the way that she wasn't allowed to drive up to the trail because the owner didn't want to tear up the cabs. So she dropped us off at the end of the pavement and we had to walk 2 1/4 miles back up to the trail. Angie was a little bitter about this. For my part, I figured that was just how things went, but after my 2 cab experiences in Big Bear, I'd say only use them as a last resort.

We made the trailhead about about 1:15pm and had an easy day of hiking while playing leap-frog with several hikers that we had briefly met at the Nature's Inn two day previous. The trail continued through the pine, tho this time on the other side of the mountain so that our vistas were of Big Bear Lake rather than the desert.

There were also lots of mining scars visible on the hills. Apparently, there were several gold rushes in the area with the first being a rather lawless one right after the civil war. I guess there were quite a few more southerners prospecting here than in other parts of the west and thus there was quite a bit more fighting over political affiliations.

Tonight we bear bagged for the first time. On our way into camp we passed a couple of hikers who said that they had seen bear scat on the trail a few miles back. Hopefully, we don't get any midnight visitors.

We saw a solar panel for the toilet at Little Bear Springs trail camp we passed near the end of the day. A solar toilet? I'm not sure what this was for since it didn't flush -- it was a pit toilet. Still curious about this one. :-)