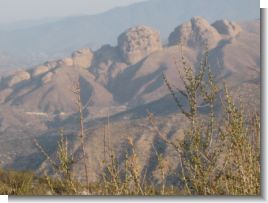 Out of the San Gabriels and into Hiker Heaven

Jason:
We got up early and meandered out of the San Gabriels, wandering over and around the foothills until we reached Soledad Canyon. There was an RV park next to the road that we stopped at to get water and and treats from it's convenience store. It was totally packed with people, hundreds and hundreds, camping (mostly tent) in an ugly, ugly RV park. Apparently, it is a big memorial day tradition to come out to this RV park from LA. I couldn't believe that they at least wouldn't find some place with a usable lake or river (there was one, but it was nasty) or something. Everyone that we talked to there was really nice tho, and they seemed to be having a great party, so I guess to each his own.
Anyway, the convenience store was closed, so we made breakfast on its steps and watered up. During breakfast, a man came over wondering if we were opening the store and if we had some burn cream for his daughter. We explained that we had nothing to do with the store, but that we had a first aid kit that might help. We dug some soothing salve out and gave it to him.
Leaving the funky RV park behind, we climbed out of Soledad Canyon and into Bobcat Canyon where were were greeted with rock formations, blazing sun, and desolation. It was early morning, but the sun was still punishing enough to make the climb out difficult. Still, we reached Agua Dulce Canyon by noon and crossed under Hwy 14 through a long tunnel. Long enough that I felt as if I was "walking towards the white light" at the other end. The shade and the wind through the tunnel was so pleasant that we took a nice break before venturing out the otherside.
Vasquez Rocks greeted us as we left the tunnel. Named after a famous bandit that made his hideout here, these red sedimentary rocks were turned and thrust up by the Magic Mountain Fault creating fantastic formations and caves. After watering up at the county park surrounding the rocks and taking a break under a large, friendly pepper tree we pushed on.
The park was at the very edge of the town Agua Dulce and in no time we were chowing mexican food in a local restaurant. With full bellies we headed for the Saufley's, local trail angels who host the hikers when they reach Agua Dulce. In minutes we ran into hikers that we knew and they led us on. Minutes after that we were passed by a squad of other hikers that we knew, all riding bikes back to Hiker Heaven (the name that the Saufley's have given their homestead during hiker season). Seconds after that a truck full of hikers stopped and gave us a ride the rest of the way.
HIKER HEAVEN. OH MY!!!
This is something to behold. About 60 hikers here camped out on the Saufley's small farm. They've put up 9 large festival tents full of cots, a motor home, a double-wide trailer, and lots of air mattresses for us all to sleep on. They ship water in so that we can all have showers each day, do our laundry for us, get our mail from a neighboring town, have 2 cars that they loan us for trips into town or to LA for equipment, have 5 or 6 bikes that we can use, and have all kinds of supplies, movies, music, and info. All of this without asking for a dime.
We've found the place full of hikers that we've met along the trail. Some we haven't seen in almost a month, others we just met. Some people have been living here a week, healing or just enjoying the festival atmosphere. It's a crazy party.
What an amazing couple Jeff and Donna are. Such generosity. It's so much fun to see all of these people again. Time to grab a beer.
Angie:
The last 10 miles before Hiker Heaven was hard for me today. I had a mild breakdown. It was just so hot, a lot of climbs and no trees. After the tunnel, things were looking up again.
Hiker Heaven lives up and exceeds its reputation. I'm so, so happy to be here, be clean and among fellow hikers. This place is fabulous.