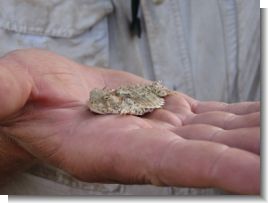 Angie:
Off the aqueduct by 5:45. Yes!! Our goal was to get across the desert floor and back into the mountains before noon and we did it. It was a hard 3000' climb into the Tehachapis, but we split it up 1400' before noon into cooler Tylerhorse Canyon and the remaining 1600' after our afternoon siesta was over around 4:30. It looked like rain in the Canyon, but, alas, no. Overall, it was a hard day, but Jason found us a nice, sheltered camp spot in between some pine trees near the highest point the PCT reaches in the Tehachapi mountains.
Jason:
Our day broke with a beautiful sunrise. A bunch of cirrus clouds had blown in over the night and they would keep the day relatively cool as we finished crossing the floor.We followed the aqueduct for another 7 miles until we reached Cottonwood Creek bridge. Right before the bridge, we found the only tap into the aqueduct for the entire 24 mile desert floor journey and watered up. We were with several other hikers, but left them napping under the bridge in order to get off of the floor before noon.
After lunch, during our climb up the mountains I saw a flash of movement as something ran away from Angie's footfall. It turned out to be a horny-toad lizard. I decided that it was about time that I tried to pet one, so I moved my hand in very slowly and it just watched me. Encouraged that it hadn't run away at first movement, I continued until I was petting it. It seemed to be quite relaxed about the whole thing so I picked it up and put it into my open palm and continued petting it. It just stood there. When I scratched its head, it sleepily closed its eyes. Very cool. It hung out on my hand until I decided to set it down again.
I'm going to try my technique again the next time I see a horny-toad lizard.