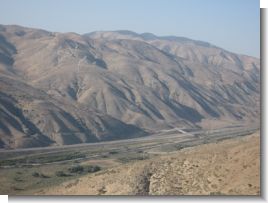 On Our Way to Kennedy Meadows

Jason:
Wow, the last leg of our Southern California journey began today. We drove to Tehachapi dropping a hiker at the trail, our packages at the post office, and the rental car off before getting a ride back to the trail from one of the Enterprise employees. Unfortunately, he was determined to drop us off at the intersection between the trail and Hwy 58 rather than Tehachapi-Willow Springs Rd. because that's where he had dropped other hikers off before. I explained multiple times that we were going to the other intersection and finally managed to get him to the correct drop-off point after about 45 minutes of driving around. Ah well... He was a nice guy with good conversation at least.
So, at 3:30pm with 7 days of food and full water (i.e. almost a 60 lb pack for me), we hit the trail again, once again weaving in and out of windmills. Our water report suggested that we had over 20 miles to go before we would hit water again and, ominously, we saw several skulls of various creatures lining the trail. Turns out we didn't need to carry full water, as there were several caches, including two very large ones at Hwy 58. Watcha gonna do? We didn't know there would be caches there.
As night fell, we climbed high above Hwy 58. The climb was a tough one. It was steep and our full packs weighed heavily. Still it was good to at least get 500' or 600' of the climb done. It's a 2000' climb, so splitting it up should make tomorrow's start a bit easier.
Our camp is on a flat spot overlooking the highway and railroad below. The lights atop the windmills on the hills opposite the highway blink brightly, lighting the entire hillside every few seconds. It shouldn't be enough to prevent me from sleeping well tonight tho.
Angie:
Ok, somehow I inadvertently missed a turn in the trail today and went off on a cow trail. Once I realized the trail was going in the wrong direction, I didn't want to backtrack. So, I did a little bushwacking down the hill in the general direction I knew I should be going. After a few, I saw Jason coming out of a nook from the hill and knew I was homefree. Trail once again!!
I was glad to see the horse skull starting out this week -- our last in the desert. It was a stereotype from the movies that had been lacking so far. :-) I sure won't miss carrying all the extra pounds of water!