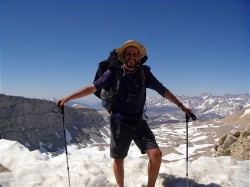 On top of Forester Pass

Two passes in one day was fun, but I am not doing that again.

We made it to the top of Forester and started looking for glaciating possibilities immediately. That is when you slide down the mountain on your butt rather than walk down. It was not hard to find good slides. After two or three it became so fun, I was using my poles to do to spins and tricks. The 360* spin soon became my favorite. That is when you jam your pole in one side of the snow and throw you body in the same direction. Once You do a full revolution you jam your pole back into the snow and throw your body in the opposite direction.

It took a good 3 hours to get down from Forester due to the slow speed of snow travel. It was almost mid day when our group split up. I was going on, but the other guys were taking Kersarge Pass into Bishop. So, I continued on my own for a bit. I was around 4pm when I got near the summit of Glen Pass. There I ran into JB. He is in his 70's and doing the PCT! I went down the pass with him. I led taking what I assumed would be the easy routes, and when I was wrong, JB simply did the opposite of what ever I did (and that was most of the time).

By 8pm I set up camp next to the Rae Lake ranger station. I was glad to have the two tallest passes behind me. As much fun as snowed out passed are, it's even nicer to have them behind you.