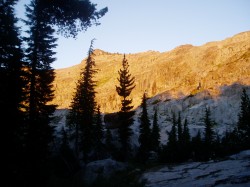 Morning in the late summer

It was 61 degrees, our warmest day yet, when we awoke on our final morning. This was a difficult day for Cody because his feet were quite sore, but the boots greatly helped—enough that he still felt the urge to chase fast moving animals! We left camp at about 6:30 a.m. and began the ascent to Frog Lake and Carson Pass. I had seen checkerspot-type butterflies (orange with black spots) frequently, but in this early light we came to a place where dozens of Tortoiseshell butterflies danced around Kerry as he moved in front. They had black edges on the sides of their wings and three black vertical lines on their leading edges. The topsides of the wings were orange and appeared dark blackish/blue when closed. It was a magical moment. Not too much later, when we crested the mountain, we passed an Indian man with his fishing rod just past Frog Lake. It was still early and we greeted each other in the peaceful morning light. He found it amusing that Cody carried his own food and wore booties.

By 8 a.m. we arrived at Carson Pass, crossed our final highway (88) and started the last 16 miles to Echo Lake. We ambled through long green meadows (Meiss Meadow) and Cody romped in the long peppery grasses- a young animal at play. We were worried as the day grew hotter and we started climbing again that it would be too much for Cody, but he hung in. The hardest section came in the last two miles when the crossing of Highway 50 was not clear and we walked two extra miles trying to find our way. At last, on track again, we walked in to Echo Lake just before 5 p.m.—our meeting time with the Solis’s and our ride home. As we topped the hill and began our final descent, they stood waving and welcoming us home. Another 76-mile stretch on our PCT journey complete.

After note: Cody stayed in “bed” the next day—Bag Balm on his feet and aspirin for pain and heat in his feet. By midday of the second day he was back on his feet and chasing dogs and squirrels in the park again.