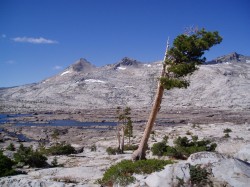 It was 6:30ish when we got up. We quickly packed up and went down to the dock to find out if the ferry would be early enough for us. As it turned out, there was a couple there already with their dog, a German Short Hair mix called Pepper. They had been told that a year ago the ferry left at 7 or 7:30—perfect timing for us. A little later we learned from one of the locals that this year the first boat left at 8 a.m. Since we had already hiked around the lake on a prior hike, we didn’t feel any great need to do it again. I recalled that it was a long way as only walks around very long lakes are. So, we took the time to cook up a cup of tea and bowl of oatmeal while we waited!

Cody played with Pepper and various other dogs that eventually showed up. He was raring to go. A little after 8 a.m., a young man showed up and took our money ($ 20 for the three of us) and we all piled into the boat with Pepper and his owners and another group of two men and a woman. They were all out for a day hike in the area of Lake Aloha. The cold ride probably took twenty minutes. It was 8:30 a.m. when we arrived at the dock on upper Echo Lake. After our last hike, we decided to put Cody in his booties right away, still concerned about how tender his feet got on the hot rocky trails.

We headed up (don’t we always start a hike in an upwards direction?) and into the Desolation Wilderness, stopping after maybe fifteen minutes to remove the layers of clothing we were still sporting from the chilly morning. The air remained cool for the whole day and I found myself thinking what a difference a month makes. It didn’t feel like a cool day in summer even with the clear blue sky. It felt like the season was turning—our first hint of winter. We hiked past the turn offs to Tamarack Lake, Lake of the Woods, Lake Lucille and along the stark edge of Lake Aloha, a Sacramento city reservoir. You wouldn’t know this by looking at it—it is actually very striking: bare white granite and water with what few trees there had been long dead at the southern end of the lake. The lake was low, a harbinger of what was to come on our three day trek.

For the rest of the morning and well into the afternoon we continued to wind our way through the granite and lakes that give the Desolation Wilderness its name. We met many day hikers and a very few back packers in this very accessible part of the Pacific Crest Trail. In the afternoon, we began a steep climb up to Dick’s Pass at 9380 feet and as we crossed it, we were impressed once again by the majesty of the Sierra Nevada. From here, we descended into the woods through which we would mostly continue until the middle of the next day. Later in the early evening as we passed Velma lakes (where we probably should have stopped), we met a man with a small dog who mentioned that he thought the weather had turned cold suddenly. This confirmed my “out of season” feeling about the coolness of the air. We walked on to a mostly dry Phipps Creek where we spent the night. There was enough water to boil and for Cody to drink, but it was not very appealing for drinking, so we didn’t.

Cody had aspirin and bag balm on his feet and this seemed to do the trick. He awakened obviously ready to go! We had a warmer second night. It was warmer inside the tent but the air was a little warmer too. We slept very well on the even flat ground with no odd bumps and bulges to cause more pain than our bones connecting with hard ground already endured! Periodically through the night, we awakened to the sound of the wind rushing over us. It came in sets like great waves on the ocean and the lull and roar followed each other unpredictably all through the night.