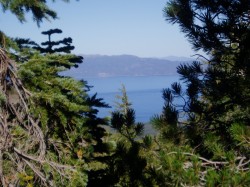 Phipps Creek to Near Five Lakes

The next morning, we ate, packed up and were on the trail by a little after 8 a.m., a late start for a 20 mile hike which normally takes us about 11 hours, with stops, altitude sickness and doggie swims. Already the days are shortening, no longer first light at five-ish, more like six-ish and we found it hard to get moving without the sun. Another challenge was that the abundant Sierra water had disappeared from the seasonal creeks and many of the so-called year round creeks were unreliable this late in the summer making water resupply a bit of challenge.

We also noticed how the symphony of wildflowers from a month ago had calmed to a closing adagio—gone were the lupines and delphiniums, mountain money penny and corn lilies. Now, a few fireweed, yarrow, paintbrush and the ever present lilac-colored aster were left in bloom amid the myriad drying stalks from the younger season. Yet another reminder that summer is fleeting, especially in these high places.

The first part of this second day was mostly through the woods, a peaceful but monotonous view. Just as we were beginning to think that we had entered the trees for good, we started to rise toward Barker Pass and entered Granite Chief Wilderness, probably the most impressive scenery of the trip. Between Barker Pass and Twin Peaks we wound our way along the spectacular crest trail with views East toward Lake Tahoe and West toward the granite mountains. The wind blew hard across the ridges. We hiked twenty-three miles, because there was no water before Five Lakes Creek. It was dusk as we pulled into a hidden flat spot near the creek crossing which offered privacy and relative comfort for our final night. Having forgone dinner the night before due to lack of water, we decided that it would be a good to go to bed on a full stomach since water was available. So I made soup and a tuna casserole in the dark. Cody took his aspirin and laid down again with bag balm on his feet.

Again, we slept well. I think the flat ground was a major factor. It’s funny, I didn’t think the relative smoothness of the ground would matter, but at least on this trip it did. I woke up in the middle of the night, worrying and laid awake for an hour. I don’t know why. It’s almost as if, my mind turned off to the rest of my life decided to kick in gear in the middle of sleep. Eventually, this too passed and I drifted into deep and restful sleep. When I awakened in the morning, Kerry was already up, packed and boiling water for breakfast. It was the sound of the stove that woke me up. I was pleased to see that Cody woke up and started chasing critters, a sure indication that he had energy and his feet were holding up.

Kerry said he heard a Great Horned Owl during the night. Cody also heard something because he woke us up with a low warning growl, possibly warning off a bear or cat. We know it wasn’t deer because he hunts them soundlessly.