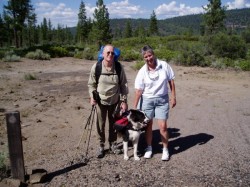 Cody and JoAnn with Mr. Cody

The trip had started so hopefully. We got up on Thursday morning at 4:30 a.m. hoping to be on the road by 5 a.m. but it was 5:20 a.m. as we were finally leaving the driveway. This confirmed what I already knew—it takes Kerry at least 45 minutes, more like an hour to get ready in the morning. He takes this long on a work morning so why would a holiday morning be any different? In any event, the time didn’t really matter because I had built extra time into the schedule. We stopped at a Starbucks, less than an hour from Oakland, just before the Winters cut-off for much needed coffee and we made good time all the way up highway 5. Unfortunately, the “short-cut” that Deems suggested we take to get to Etna (where we planned to leave our car) was not named as he described. We looked for the “Gazelle-Callahan” Road, which turned out to be the Stewart Springs Road to Gazelle and Callahan. Once this was sorted out, we were fortunate to pick up a fire permit at the CDF in Callahan and arrive at Etna to find JoAnn Michaels waiting for us, but not for too long.

She lead the way up to Etna Summit where the trail crosses the road and we parked our car. We planned to leave our car here at the end of our section hike and JoAnn drove us back to Old Station to start us on the trail. It was 12:30 when we started the drive back to Old Station, and what a way it was! We picked up a sandwich at a store there (we had hoped/planned to buy JoAnn a nice lunch, but there was nothing much there). By 4:30 p.m., we were on the trail—took one last photo with JoAnn and then we were off in the warm late afternoon sun. It was hot, but not unbearably so because of the lateness in the day. We were working our way to the top of Hat Creek Rim, but it was a gradual ascent. The ground was covered in a blue/lilac colored penstemon that had an electric quality to the color, it was luminescent. There were also orange paintbrush and all kinds of yellow daisies that looked brilliant in the light of the dying day.

An hour or two out, we came to the outlook that Stafford had driven us to last year. I had quite forgotten about it but there we were, on top of the rim. I had hoped there might be water, but there wasn’t. I had lost about a liter of my water, because my drink hose had a crack in the cap, so I was going to have to drink my water in an ordinary bottle. Even this didn’t phase me—we were on the trail!At one point, we came out on one of the many forest service roads that we would cross and could not find the trail again even after retracing our steps several times. Kerry thought we should follow an abandoned road because it went in the right direction so we did that until it petered out. Then looking at the map, he headed straight for the edge of the rim to our West, and there, as he predicted, he re-found the trail. We walked on, following this edge of the rim for miles.

As we walked along, we spotted a baby bird flopping around on the trail. Cody would have dispatched him in short order but we told him to leave it and he did, the baby bird happily flopping into the undergrowth. As we walked along the rim the views of snow-covered Lassen behind us were magnificent, and ahead, Shasta still very distant started to give promise of what was to come. Eventually, we decided that we should stop for the night and get settled down before it was too dark to see. A line of clouds in the West hovered over the line of sunset and thunder and lightening lighted the clouds from within. There was no menace in it, far away as it was, just a beautiful display of lights and color in the setting sun. We were at 4460 feet and quite alone. There were a few mosquitoes, but not too many and we decided to sleep under the stars. Every time I awoke in the night I could tell the passage of time by the movements of the stars across the sky.