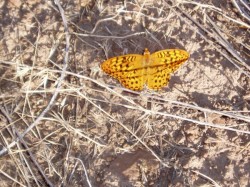 It was 50 degrees the next morning when we got up—slept in until about 5:45 a.m. When we suspect it’s going to be hot, we try to get an early start on the day, but it usually takes us a few days to slip into a routine. The mosquitoes buzzed me intermittently in the night and this made a restless night for me. I think Kerry slept well. We continued along the ridge of Hat Creek Rim, a cool morning breeze keeping us refreshed, As we walked on, Lassen was becoming noticeably more distant as Shasta came to the fore. The views were spectacular in both directions.

We saw lots of butterflies, different ones, specifically a kind of checkerspot that I got a good photo of and will need to find a book to look it up. There were also black butterflies, at least two different varieties; one had a little eye in the tip of its upper wing when they were closed. We also saw the usual: California sisters and western and pale swallowtails. There were new flowers for us too: a beautiful lily whose shape was just like a Mariposa Lily but whose color was the most lovely lilac.

By Forest Road, we came across a water cache that was placed there by Papa Amigo and Mountain Stan—we topped up our water supply, which was Ok but we had been a little concerned because we were drinking more than we thought we would in the heat. Papa Amigo wrote a note in the journal there about his son who had gone to hike in South America and got bitten by a dog. Some other people had signed the journal, which had been there about a week, but no through hikers yet.

As we descended from the rim, the day got long in the tooth as well, and the temperature shot up to over 100 degrees on Kerry’s wrist—probably it was in the high 90s, quite hot enough for anyone and too hot for Cody. We wended our way along the floor of the valley and final came to a little creek, the only water available before Burney Falls, 12 miles away. The creek was clearly a watering hole for the local wildlife (deer) and since we camped near it, we were a bit of an interruption to them. We washed our clothes and ourselves and ate a crab sandwich for dinner. This time we put up the tent and had to bring Cody inside because the mosquitoes were so thick. They kept landing on his nose and he had no peace. He was happier in the tent anyway. I, however, was a bit cramped with him at my head.