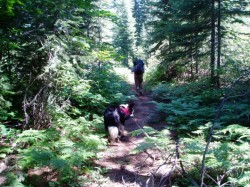 The next morning, we got up, still worried about Cody’s paws. Looking back, I suppose I should have realized that they weren’t going to improve, but that part will come. Again we slept late; I suppose this is relative. Our main reason for wanting to get on an early start was having to battle, and that’s exactly what it felt like, the heat of the day, We were now over 4,000 feet again and going up, so this was no longer a great concern. It was 6:40 a.m. when we got on the trail. We hiked on to Peavine Creek, which disappointingly turned out to be a steam deeply covered in willow and brush and barely accessible as it passed into a tunnel under the road. We stopped there for lunch however and enjoyed its cool refreshing waters.

After lunch we started up again; the trail was visible but not well marked and in places quite overgrown. We started to get more views and though there weren’t a lot of wildflowers the ones we saw were beautiful. There were little wild roses in pink to deep pink colors that were delightful. We also saw larkspur, paintbrush and columbine and the less common wild ginger and little yellow violets. About three o’clock, we came across an enormous guy who said he had been out for three weeks and he was very proud to have lost a lot of weight. He said he started out at about 300 lbs and he thought he was down to about 230. If true, I could see this was quite a feat. He was very dirty and he had run out of water so Kerry gave him some of his. We told him there was water within an hour behind us—we could hear it running but we weren’t sure there was a way to get down to it. He thanked us and moved on. His name was Scott.

Eventually, we headed over the ridge that approaches Bartle Gap and this provided some wonderful vistas of Mt. Shasta, now noticeably closer. We were looking for the Headwaters of Moose Head River. For the last several miles, we kept thinking we were there, and of course, we weren’t. We hiked a good twenty-four miles that day, and as it turned out, they were our last. When we got to Moose Head Headwaters, we had to set up our tent on the trail (the mosquitoes were profuse and hungry). We took off Cody’s boots and found that one of his pads had rubbed raw, there was no way for him to continue.

It was a bad night. I could not sleep worrying about how to get Cody off the trail. I kept thinking about the options and there weren’t many. When I finally went to sleep toward dawn, Kerry’s alarm kept going off: 4:15, 4:30 and 4:45, effectively ruining the sleep I fell into from sheer exhaustion.