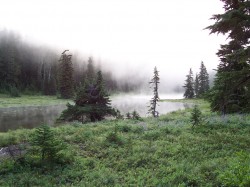 When we awoke the next morning the fog was floating above the lakes and meadows that we crossed. We surprised one person in a tent at Junction Lake—a head popped out when he heard us talking. We would have lowered our voices had we known that he was there, but his tent just appeared out of the mists from nowhere. Today, I mentally came home. I don’t know why it took so long but I was on the trail again, the sleepiness (lack of caffeine?) had gone and I had ceased to think about anything beyond the butterfly or flower of the moment—oh, and the frogs. That evening we crossed road 23 and shortly came to a stream. In the middle of it I could see what appeared to me to be a pile of submerged garbage, but Kerry leaned down to pull it out and instead of junk came up with a can of Pabst Blue Ribbon beer. At first we thought perhaps someone was having a picnic and had placed it there to get cold and then we decided that was highly unlikely since the sun was going down and we were out in the middle of nowhere with nary a sign of anyone. We eventually decided that it must have been trail magic, placed there by a trail angel. So we took a beer each—they were big ones the 16-oz size! —and walked on the next mile or two to our camp for the night by an icy stream. Kerry had been complaining that his tendons were starting to hurt so I tried to get him to sit with his ankle and lower leg in the cold water. We had already bathed in it and it was icy cold, probably straight off Mt. Adams. I was surprised that Kerry was a big baby, complaining that it was too cold to sit with his foot in it. Under protest he sat briefly by the stream with the water over his ankle. I don’t know if it helped but it made me feel better to think he was looking after himself. We ate our dinner and savored our beers. Pabst is not a brand I would normally buy, but nothing tasted better after a long walk and a sparse but satisfying meal. I mentally thanked our trail angel and wished good things for him or her. Relaxed now and looking forward to laying down to a good sleep, I told Kerry my story about the fairies and the cobwebs to which his only comment was that from the spider’s point of view, I was the meal that got away!