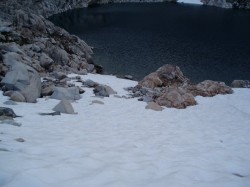 Trail near the top of Glen Pass

When I got up at 4:40 I quickly got ready, deciding to skip breakfast and eat later. I was on the trail shortly after 5:30. It was very peaceful and the birds were singing. The soft light of dawn added coolness to the already cool air and walking was very pleasant. There was smoke in the early morning air, but it would disappear as the day wore on. The climb was fairly steep and soon I saw an increasing number of snow patches many of which I had to cross on fairly steep and scary slopes. The snow was perfect for walking on—not so hard it wouldn’t provide traction but not so soft that it wouldn’t bear my weight. As I came over the top of Glen Pass, predictably, I found more snow on the North side. Fortunately, when the trail is invisible going downhill, it is easier to find the way than going up hill because for the most part you can look down on the area that you need to traverse and any hint of tracks or trail is easier to find. I had been hiking three or four hours when I saw the first group of people coming up the mountain. They thought they had an early start and looked very surprised to see me coming down. I was glad that I had the mountain to myself—it’s hard to describe the feeling of being totally alone in such a wild and wonderful place.

Just above the Southern-most Rae Lake I sat down by a stream and ate my breakfast. It must have been about 9:30 or 10 a.m. A bunch of people passed me, Southbound. Many of them stopped to ask me about conditions and other things—it was a bit hard to eat my food, which I still had to will myself to eat. After breakfast, I quickly reached the main Rae Lakes area where I had to hold on tight to Cody—there were the ubiquitous deer and his current favorite animal, the marmot was in evidence everywhere. Here was where I was first truly annoyed by mosquitoes. I used some mosquito repellant on my face, neck and hands and that seemed to help. They would land on Cody with little effect but then they found his nose, which they attacked mercilessly. I would frequently wipe them off with my hand only to smear blood on his white muzzle. There were lots of butterflies too: mostly some kind of checkerspot.

In this area I met quite a few people traveling southbound, I spoke briefly to a young man named Eric who said he had heard about “a lady with a dog;” this puzzled me because how would he have heard about me when I had yet to go where he had been? A little later I ran into two young Australian women who made a big fuss of Cody. I ran into quite a few people many of whom would stop to talk. Mr. C. was the main attraction and I was reminded of traveling with my children when they were very young, how people would stop me and talk. Dogs and babies—everyone loves them (well, maybe not everyone!). I heard comments like, “what a beautiful dog” and “I love dogs—I’d love to bring mine but there is no way he could do a hike like this.” In general, people were very nice.

Continuing down the valley, I saw lots of wildflowers—always the shooting stars, but for the first time I saw tiger lilies and columbine. Eventually, I came to Woods Creek—a deep and fast running creek traversed by a long single-person suspension bridge. On the bridge is a sign that says, “One person at a time.” It was only last year that Cody overcame his fear of bridges—or rather he decided that he would rather deal with a bridge than the prospect of swimming. But this bridge even gave me pause. It looked sturdy enough, but it also looked a bit flimsy. Wide enough for a single person, it took to swinging with my movement as I crossed. And Cody was not about to wait for me to cross and then cross by himself. In complete trust, he thought if he stayed close by me, he would be safe and that’s what he did. So each time the two of us moved the bridge got a little swinging bounce to it that increased with each step. In addition, as we walked across the slats of the bridge, I had a very clear view of the rushing creek below so I didn’t even need my overactive imagination to think about the consequences of bridge failure or just falling, I could see it with every step! Needless to say I was quite relieved to reach the other side!

I saw lots of wildflowers including Mariposa lilies and various varieties of butterflies, but mostly checkerspots. We stopped to eat lunch by the rushing creek; a brief interlude before the inevitable climb up to the next pass—Pinchot Pass. I didn’t remember this pass as being particularly steep and it wasn’t, but it kept winding up as the day wore on. Several times I thought I must be nearing the summit only to turn another corner and find another part of a mountain to climb. The trees and the lakes started to thin and I found myself crossing larger swathes of snow as the terrain became rocky and barren. I was beginning to think that perhaps I would not make it over the pass when I saw a solo young woman coming toward me. She never said a word, but she was the only person that I would see in about a 24 hour period. She reminded me that I was quite alone. In less than an hour I was at the top of Pinchot Pass and Cody and I were really feeling it was time to find rest for the day. It was getting late and it had been a long day. Below us Lake Marjorie and several other lakes sat invitingly amid the stark granite mountains covered in patchy snow. We started down, picking our way through small and sporadic snowfields, my attention riveted to our destination lake.

I probably should have hiked further down the valley but I was tired and I liked the idea of sleeping high with nothing to interrupt the view of the stars. With no good reason, I thought the mosquitoes would be slightly better here than lower down. In retrospect, I think that was not a good assumption. I walked passed the first lake and chose a land bridge between the second and third lakes—there was no cover and the ground was not quite even or level but I was able to find a patch big enough to spread the ground cloth for Cody and I to sleep on.

I started on my now comforting and established routine: washed myself, clothes and started to get the food out. I put Cody’s food in his dish and my muffin in my dish and turned to get my packet of tuna fish to put on top of the muffin. I had my back to Cody for just a few seconds, but when I turned back to get my food, he had not only consumed his food, but he had my muffin in his mouth! Normally, he would never take food not offered to him but two things were going on here. First, the food was on the ground, not on a table and food on the ground was normally fair game for him. Second, he was undoubtedly very hungry, having just hiked nearly twenty miles. Cody is a big dog and he could have swallowed that muffin in no time, but in the split second it took me to react he just looked at me as though asking for permission to eat it. Upon seeing him with my dinner in his mouth, I screeched, “drop it,” which unbelievably he did. I had no extra food and I wasn’t eating very well so I couldn’t afford to lose the muffin. I immediately picked up the muffin which seemed remarkably free of dog cooties and ate it with relish with my tuna. We were a team, Cody and I!

Cody went to sleep soon after he ate and was having very active dreams: feet twitching and little muffled barks coming from deep in his throat. I think he was catching those marmots in his sleep. I kept the head net on after I climbed into my sleeping bag and before the sun went down—another routine that I kept up for most of the rest of the trip. The mosquitoes would be active until after the sky grew black and then they would disappear and I could sleep in peace.

On this night, I was delighted to wake up as I always did, with a clear view of the sky alive with the summer constellations making their way across it. The Northern constellations did their pirouette around the North Star and the Milky Way brightened the sky. The stars lit the mountains and the snow took on the form of two dragons facing each other. It might have been scary but it was just beautiful and I watched the dragons through the night who stood against the cliffs poised like old friends watching over me. When the soft light of the coming day started in the East my dragons disappeared as quickly as they came.