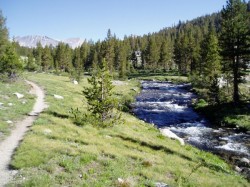 In the morning, Cody and I ate and packed up to leave. A creature of habit, I discovered that I had not packed my sleeping bag and clothes inside the plastic trash bag liner I use to protect them from water (a sudden rain or an accidental fall in the drink). I am acutely aware that the best way to stay comfortable and safe is to not veer from what works. One bad decision can lead to a succession of events that can be devastating. So I pulled everything out and repacked. I was underway by 5:45. The landscape now rapidly changed from rocks and water to high plateau and trees. I walked for some time down the valley until I crossed what I thought must be a tributary on the King’s River. I walked quickly past a ranger station and held on tightly to Cody as we passed some deer—one of them the largest buck I had ever seen. They had no fear—quite a different reaction from the deer at home who take off at the first sight of Mr. C.

About mid morning, I breathed a fly into my windpipe and choked on it. It was just small enough that it didn’t completely cut off my breathing, thank heavens, but it caused me to have a terrific coughing fit. Choking on anything is bad enough but I was disgusted at the thought of a something as dirty as a fly in my lungs and this motivated me to cough even more. Who swallows flies anyway?

Now we started up again—on toward Mather Pass. The high plateaus were rocky and the tropical blue lakes held on to the ice but I knew it would be gone soon. I felt fortunate to be here now, when the brief Sierra Spring was in full glory. This morning, Cody’s feet were a bit tender and I began to worry about them. Putting his shoes on was always a difficult decision because sometimes they caused more problems on him than off. I crossed several streams that were running fast and deep enough that I had to remove my shoes and use the crocks to cross them. The lovely alpine vistas gave way to granite and eventually to stark and dark Mather Pass. Mather Pass was brutal—scree on both the North and South sides. Approaching it on the south side, the landscape was strange and alien. I met a single man coming south and he told me there were quite a few people he had passed that morning coming from my direction. I put Cody’s shoes on and then we picked our way up the final steep traverse to the top. There I met another couple resting, they quickly pulled ahead of me on the way down, which was treacherously rocky and snow covered. Somewhere along the way I discovered that my pole had broken, sheared off in the same place as the first one.

This was a big disappointment. Now I had no poles to help me through the snow, nor did I have a pole to pitch my tent. Fortunately, I was too focused on making my way safely down the pass to worry about this at the time.

As I had found with the early passes since Mt. Whitney, the trip down valley on the North side was long, steep and dramatic. Lakes cascaded into each other at the high end of the valley, eventually petering into cascading creeks. The views were stunning—granite in the foreground rolling away into the distant mountains and trees growing wherever they could find a toehold; dotting the landscape and creating a pattern of color against the blue sky. Where there was water, and it was everywhere, the wildflowers made a cacophony of color and texture, so loud it was overwhelming to my senses.

The trail down from Mather Pass was very steep and rocky. By the time I got to the Middle Fork of the Kings River, I was very tired. I had hoped to go a little further so I wouldn’t have so far to go the next day but Cody’s feet needed a rest and I was getting worried that I might be delayed in making that phone call to Kerry from Vermillion Valley Resort (VVR) as promised on Monday. The Le Conte Ranger Station was still three miles away.

That night, I plotted what options I had if Cody’s feet gave out and decided the best answer was just to slow my pace. He had done remarkably well over some very tough terrain and I felt that he would be fine if I didn’t push him too hard. I decided that I would stop at the LeConte Ranger Station and ask them to get word to Kerry that I was fine but going slower than I thought so that he wouldn’t worry about me. I woke up at 4:46 a.m. having slept through the alarm. I was feeling a bit stressed about Cody. I choked down the usual breakfast of rolled grains, nuts, dried fruit, milk and cinnamon. Kerry eats this concoction every day and on the trail it is an incredibly effective meal. We have been stuck in bad weather before and were unable to eat at regular intervals, but if we started our days with this meal we have always been able to go a very long way without refueling. So I made myself eat it and put some of the dreaded and rejected macadamia nut butter on Cody’s kibble. When he was a puppy we used to give him a Kong filled with kibble and peanut butter so this was a real treat for him. At least one of us wasn’t having trouble eating.