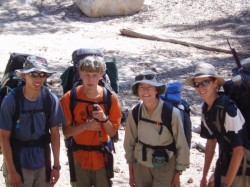 I got up at 4:30 a.m. knowing that the mosquitoes would be looking for breakfast soon, I was motivated to get on the trail ahead of them and by 5:40 a.m. I had packed, we had both eaten and we were ready to leave. As I walked by my sleeping neighbors, one of them raised an arm in a wave and I gently placed the borrowed pole with its partner against a rock and quietly walked away just as I said I would. The trail now undulated up and down toward Purple Lake where I heard voices but didn’t see anyone. Then I started upward again and walked high on the western side of ridge with vast vistas across the valley to the west. This is the kind of country that makes my spirits soar. I think about all the people who have traveled before me, both recently and the native peoples of the not so distant past. There eyes have seen what I see now and I wonder if they felt overwhelmed as I am by the incredible grandeur of the place.

Before I left on this journey, I had spoken to one of our council’s 18 year-old Eagle Scouts, Bryan, who just graduating from high school, planned to hike the JMT North to South with four of his friends. We had briefly talked about helping each other with resupply but our plans did not mesh for that. However, we had established that we should pass each other on the trail today early. I was beginning to wonder if perhaps I’d missed them and I almost did. One member of the group had walked by me when I spotted Bryan loping up the trail in a floppy hat. They had just left Deer Creek, three Eagle Scouts and a single girl. One of their group had dropped out at Mammoth Lakes due to an injury. “JJ,” one of the boys, asked me what it was like hiking alone. Mindful of the great team building Scouts promotes, I replied, “It’s great—no teamwork!” We took a few photos and went our separate ways. They were having a grand adventure and I couldn’t help but think what a great program Scouting is—not a lot of young people would think to make such a journey and even if they did, without a program like Scouts, they probably wouldn’t have the skills.

I was steadily losing elevation at this point and as I closed on Reds Meadow the terrain became increasingly dry and dusty. The charred remains of trees left the ground open and unprotected from the sun and I began to be concerned for Cody’s feet. I put his shoes on as the ground became more exposed and the day grew warmer. Every once in a while we’d pass a small wet area where wild flowers, particularly yellow monkey flower flourished. Cody would plunk himself in the shade and look at me with an expression that asked if we could just please stay here a while.

It was 1:30 p.m. when we reached the café at Reds Meadow. I sat down outside before going in to get a bite eat. The place was crowded so I shared a table with another solo hiker, a south bounder and we exchanged news of the trail. When the waitress came, I ordered a hamburger and asked if I could just buy a hot dog (out of the package) for my dog. I didn’t want to pay for the $ 6 one they had on the menu. At first she said, “No” and then she went and spoke to the chef and brought me a hot dog in a bun and on a plate for $ 3, which I then offered to Mr. C. The hot dog was gone before I sat back down to eat. Mr. C. somewhat happy, I won’t say satiated, because I suspect a package of hot dogs would have disappeared without too much trouble, lay down outside the café for an afternoon nap.

After I’d eaten I went back outside and had a beer—there were lots of other hikers now and I sat and talked with them for quite awhile. There were Pauline and Jimmie, thru-hikers who eventually linked up with a woman they had met a couple of days ago at VVR and they went into Mammoth for a meal and a movie. They invited me to go along but I declined, being a section hiker the call of civilization has no pull for me. Then I met some hikers who had hiked the AT and seemed a bit impressed with themselves. I met a lot of people and eventually someone recommended I take a shower in the hot spring bathhouse. Mr. Cody was definitely looking like he could use a break so I decided that I would stop for the day. We were making good mileage and I really was in no hurry—in fact now I was beginning to regret that I was so close to end of this journey.

Unlike at VVR, the phone (Verizon) worked here, so I called Kerry. He told me that his stepmother had died early on Sunday morning, the day I called him from VVR. He hadn’t told me then because he knew that we couldn’t speak for long on the satellite phone and there was really nothing I could do. Now he told me that the service was set for Thursday, the day before he was to pick me up in Yosemite. Barbara had started having problems more than a year ago and the doctors had not been able to diagnose her illness. By February of this year, they found cancer growing in her colon, pancreas and other organs. She had valiantly tried different treatments to extend her life but the last few months had seen a steady decline. Only last summer, she and my father-in-law had been our trail angels for our hike of the first half of Washington State and now she is gone. I felt numb. Death comes to us all, and usually not at the time of our choosing. I found myself thinking about our ultimate insignificance in the universe.

After I spoke to Kerry, I walked over to the campground and the showers. There was a long bunk house with a dozen or so doors to each “bath”-it looked a bit like an old barn.

There was one free room and I took it. Inside it was dank, dark and bare but for a concrete tub at the side of the room. A little light came through some slats over the tub but mostly it was pretty grim. That all disappeared in the spray of warm water that poured over my skin from the dripping showerhead over the tub. One temperature only, but it was perfect—better than any conventional shower, the water, straight out of the earth, poured over me in steady hot stream to my heart’s delight. I felt the heat seep into my bones and leach the tiredness out of me. I washed my clothes and put my Frogg Toggs on while they dried. I suppose I wasn’t clean in the strictest sense of that word, but I felt wonderful.

I walked down to the campground and took one of three remaining campsites. It was really much too big for one person and I felt a little odd so close to so many people. I again thought about going on but I knew that Mr. C. needed a rest. Spotting cars at the campground he was already making the rounds and looking hopefully at any open car doors. He had a way of going up to perfect strangers and looking mournfully at them and I knew he was thinking, “Oh please, take me home!” So stay we would and Mr. C. spent the rest of the afternoon enjoying his doggy dreams—about more marmots, no doubt.

For some reason, quietly minding my own business, I had visits from my neighbors, and two different parties in particular. There was a young woman, Jess, who had just finished a job with the State Department and was heading off to graduate school at Princeton and her hiking partner Caylin, who had just graduated from Stanford and was looking for work. They were hiking southbound on the JMT. They invited me to dinner back at the café, but still full from lunch I declined. My other neighbors, a family from Southern California, included Gwen (who had hiked much of the PCT in the 80s with her ex-husband); her current husband, Marshall and their child, Reed. Gwen, stand-offish at first, brought me fruit and finally a glass of chardonnay. They also offered to cook something for me but I wasn’t hungry and I didn’t feel like going back to the store to find something to grill. I spent some time talking with them and was just getting ready to retire for the night when a group of 20 or so youth and their leaders arrived looking for a campsite. It was clear they needed the space I had so I moved onto a patch of grass behind Gwen’s family’s site and drifted into sleep fairly quickly.