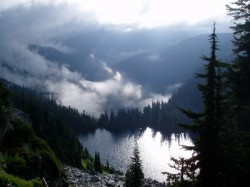 Looking Down on Trap Lake

We woke up at 5,000 feet and the temperature was 54 degrees—getting warmer! Today we would head in to Steven’s Pass to meet Nancy and Staff and the prospect of a home cooked meal. As we headed out in the chilly morning (upwards again); the rain had stopped but the damp mist draped the valley below. It caught on trees and folds in the land that held it in place; seemingly trapped by inertia and its own weight.

Just past Hope Lake we ran into a crew of Washington Youth Conservation Corps workers. They had spent two weeks rebuilding a trail over a section of the trail where more than seasonal water flowed. They had collected rocks from elsewhere to build up the path and cut down a couple of trees which they had stripped of bark and hewn into logs to place on the sides of the rocks. When we arrived they were working as a team to move the logs into place. They would chant as I have heard military people do to synchronize their movements and the word I heard sounded like, “awesome.” There was a young woman standing to the side and I asked her what they were saying, she said “ASA, a Japanese word, sounding like, I suck, which we do.” She was quite earnest in her comment and I wanted to tell her that they didn’t suck, that they were doing something worthwhile, but I knew she had her own good reasons for making the statement so instead I just smiled and said, “Thank you for all the work you are doing on the trails.” When she saw that we were interested, she went on to explain that once the logs were in place, they would fill them with earth, leveling the trail and saving the hillside from further erosion.

Meanwhile, Cody found a line of backpacks. The young woman told us they had turkey, potatoes and gravy. I told her this explained Mr. Cody’s interest since he was permanently hungry. For some reason, she found this hilarious and broke into a squeal of laughter.

Walking on we passed Mig Lake where we saw the Conservation Corps base camp. We also saw a sign that said “toilet” with an arrow. We would see several of these signs in the days to come and I never understood how they worked. I would follow where the sign pointed and find nothing there. Later, someone explained to me that if you follow the arrow far enough you would find a box with a lid that covered a crude toilet—a funny thing in the wilderness but perhaps a good idea in highly impacted areas.

We passed my namesake, Josephine Lake and hiked on and up another ridge before dropping down to Steven’s Pass in the early afternoon. Just as we entered the trailhead parking lot a car pulled up and a young man got out of it—Dusty. He is a trail angel and immediately offered us drinks and fruit, which we accepted gratefully. Kerry called his brother Stafford who told him he and his wife, Nancy were about 45 minutes away. Meanwhile, Dusty explained that he was there to help the Dinsmores with a barbecue they planned to set up for Joe Kistler and Scott Williamson, the pair who were hiking the PCT for the umpteenth time with the express goal of breaking the speed record set by Joe some years earlier. This was quite a coincidence for us since we had given up on meeting the Dinsmores because we didn’t feel we could hitchhike to their home 11 miles away with our giant border collie. Shortly another man, Mike, drove up and then after him, the Dinsmores themselves and others pulled into the parking lot. It was clear there was going to be a party. There was a Canadian couple, Angela and Collin, who were through hikers. We would see them again briefly at Stehekin. Andrea Dinsmore told me that most of the dogs they see have really suffered, with sore hindquarters and damaged feet. I suggested that some dogs do well, as Cody clearly did: bright eyed, energetic and prowling around for food! We stood and talked for a while and then Nancy and Stafford arrived. We packed up and took off—happy to see Staff and Nancy but sorry to miss the party, we knew we would see Joe and Scott later on the trail.

We planned to go just 3 ½ miles beyond Steven’s Pass to a meadow with Staff and Nancy who planned to spend the night with us. I should have known that at this time of year, “meadow” was synonymous with mosquitoes—and so it was. Having been on the trail a few days, Kerry and I had found our comfort level with them—we knew what to do to make them bearable: clothing, head nets and/or repellant but Nancy especially seemed to suffer from their viciousness. I have a theory that the mosquitoes know their best victims and go for them. I came to this conclusion after being the mosquito attracter in my family for many years and deciding that I didn’t like that role. They don’t seem to bother me so much any more and the welts I get aren’t as bad as they used to be—probably some resistance I’ve built up over time—whatever it is, it’s a vast improvement!

We had been unable to wash so far, so despite the mosquitoes, Kerry and I both washed ourselves and aired out our bags briefly. Even before the sun went down, everything left out was wet from heavy dew. In spite of our lower elevation this was the dampest and one of the coldest places we would stay.

Stafford and Nancy had carried a huge amount in, including several gallons of water! They put up their tent complete with cots and then set up a full kitchen with table and stove upon which Stafford warmed up his famous “Killer Stew,” a Boy Scout recipe, which we ate with sourdough bread. It is a great dish any time but after four days and 85 miles on the trail it was wonderful!

At about 8:15 we heard Joe Kistler and Scott Williamson and went out to the trail to greet them. They were very gracious; we chatted briefly and wished them well. Stafford took some photos before they moved on. I would regret later that I neglected to ask them about the detour to by-pass the Suiattle Bridge. We were told it was impassable when they knew for a fact that there was a log upon which one could cross over. But more on that later!