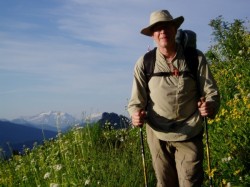 Kerry Happy Early in the Day

When we got up at 5:45 a.m. it was 59 degrees—positively balmy! We were at mile 2500.2—200 miles to go. It was strange thinking about it like that. 200 miles to go—then what? This journey would end and where would a new one take us? I couldn’t quite get my head around this thought. Today, we would start on the “Detour”—Indian Pass to Miners Creek—the detour had been in effect since about 2003 when many of the bridges on the PCT had been damaged or washed out. The data book warned us that a “high level of backcountry skill was required.” I took this with a grain of salt when we started, and then I understood why the writer had given us fair warning. This little maintained trail made the rest of the hike seem like a walk in the woods by comparison!

We hiked out of the valley where Pass Creek flowed and over some ridges to Sally Ann Lake, beautiful as promised by Kathy and Randy, but there were campers there and we had enjoyed the night quite alone at Pass Creek. One of the campers had a bear barrel, and we learned that bears are a real concern in this area. We never saw any—a happenstance that we attributed to the presence of our four-legged bear barrel, Mr. Cody! Soon after Sally Ann Lake, we came to Indian Pass where we had to choose to take the detour or to continue on the PCT. The trail was not marked for the detour and the path away from the PCT looked ominously narrow and little-used by comparison but the thought of coming to a wide river with no route across it, sealed the decision for us: we might have found a way across but how would we get Mr. C. across—a swimmer, he is not.

Once firmly committed to the detour, we ran into our first challenge within a few miles of the PCT: not one or two trees lay in our path, but an entire forest full of trees lay across the trail! Kerry, taking the lead, wound our way over limbs and around trunks, at times taking us so far from the main trail that I was worried that we would not be able to find it on the other side. The vegetation was thick and dense, but eventually we did regain the path, only to find more downed trees and thick brush covering our path, but soldier on we did. We stopped for lunch by the side of a creek and tried to calculate how we would make up the additional 5 ½ miles we would have to walk as a result of taking this detour. It was very slow going—we had to push our way through the undergrowth in many places and the path was much more challenging than the PCT—very steep in places and little more than a deer track.

On our way down to White River, we passed two young men with hand saws, who claimed to work for the forest service. They knew about the avalanche of trees up trail from us and it was their job to clear it. Kerry and I thought it was going to take lot more than two guys with handsaws to clear that lot, but held our peace. Instead, we thanked them for their work and hiked on feeling a little more confident that perhaps the trail would be ok. Eleven hard miles past Indian Pass, we came to White River, always heading downwards, giving me much foreboding about the inevitable upward climb. But for now, we stopped at White River (2549 feet on my watch) to have a snack and a brief rest. When we took Cody’s pack off, I notice a very small blister on one of his front paws. Kerry thought it was ok for him to walk on because Cody didn’t even notice it, but from experience, I knew that it was best to take no chances: I removed his pack and now I would carry it the remaining three days to Stehekin.

It was while coming to this decision, that I realized we had another problem. I had calculated our arrival in Stehekin on Sunday night. I now realized that we would arrive there on Monday night, which meant that we would have to extend the remaining two days of food to three. When I gave Kerry the news, he barely gave it a second thought, “I needed to lose some more weight anyway,” he said! Very generous of him, but also illustrative of how over the years we have become very stoic—when something goes wrong we look for the solution and choose not to dwell on the potential catastrophe. It reminds me of John Adams, “Hitch Hikers Guide to the Universe” and his motto, “Don’t Panic.” I always think of that, and it works.

I was not very happy with Kerry right now because I had hoped to look for a way across White River instead of hiking South, crossing the river at a bridge and then hiking North to where we were on the other side—about five miles out of our way altogether. Never the less this is exactly what we did and it was getting quite late by the time we got to Boulder Creek, almost 23 miles from Pass Creek. There were no mosquitoes to speak of but plenty of horseflies. Regardless, we gratefully set up camp. There, we ate our truncated meal, washed our clothes and ourselves (a small but important luxury), and watched the sky turn a beautiful golden color before fading to rose and deepening to dark—a rare treat in the land of mist and rain. We went to sleep under the stars only to be awakened in the early night when the moon rose over a ridge and suddenly shone down on us like a giant spotlight in the sky. It was quite disorienting until we figured out what was going on.