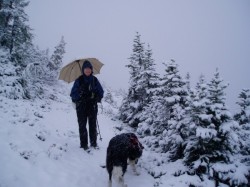 It rained all night! At 4:50 a.m. Kerry got up to pee. Normally we would get up at this time but it was cold and we could hear the un-abating rain pattering on the wall of the tent. I suggested that we sleep longer and perhaps the rain would stop with the dawn. At about 6:30 a.m. we started to stir and looking out of the tent saw that the rain had turned to freezing rain, and then to our horror, as we watched, it turned to snow. It was clear that the weather was not improving. We packed up and by the time we left at 8 a.m.—a very late start for us—there was a solid white covering on the ground and everywhere, we were beginning to worry that we might lose the trail.

Cody turned into a white dog—the snow was the sticky variety and it clung to his fur, too cold to melt and too wet to fall off. As we walked the snow built up on the bottom of our shoes making it hard to walk. Periodically, it would come off in a giant clump, creating a sudden imbalance that made us susceptible to falls and twisted ankles. My feet were very cold. I put them in plastic bags, which normally warms them up but nothing worked today. We walked seven miles to Harts Pass in driving wind and snow, along the way we met a few intrepid souls—all were bailing out. At Harts Pass there were two guys who were very cold, they had not come prepared for the freak storm and were waiting for their wives to come and collect them. They clearly thought we were crazy to go on. I think if someone had offered us a ride at that moment we would seriously have considered taking it because we were miserably cold. Instead, we ate swiss chocolate and started the long climb out of Harts Pass in the driving wind and snow. Standing around those few minutes at Harts Pass had not improved my warmth factor and now my feet were so cold, I began to worry about frost bite.

After a couple of hours, we noticed the wind was a little less fierce and the snow slowed up. Visibility began to improve as the sky lifted off our shoulders and a white ceiling formed over us instead of through us. Eventually, the snow stopped sometime in the afternoon and it got a little warmer, my feet warmed sufficiently (still very cold!) that I no longer worried about losing toes. We continued through what should have been spectacular country but was still shrouded in fog and low-lying clouds.

We reached the campsite at the spring 2.4 miles past Holcomb Creek while there was still light to get the tent set up and make a good meal on our faulty stove. The tent of course was still sodden from the unremitting precipitation of the last two days. I used my wet bandanas to mop up excess water on the floor and hoped the air would dry the surface sufficiently to put the sleeping bags inside. Our campsite was under some great old evergreens on a hillside laden with flowers, presumably nurtured by the spring. The jagged peaks and lush landscape looked something straight out of the Swiss Alps. It matched our mood, optimistic now that we had weathered the storm. Here we were in this idyllic spot, our final night on the trail.