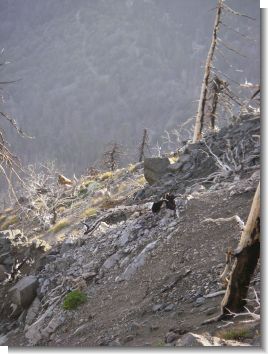 can you find a bighorn sheep in this photo? Me neither, but they

We were lucky in our return trip to the trailhead as we were on the way in to town. Wrightwood has a number of trail angels, whose names are posted in a book in the hardware store. We called one and she happily gave the four of us a ride. Her name was White Buffalo, and she had snow white hair. She hiked the AT many years ago, which is where she came by her trailname. We were a bit anxious about the trail ahead - Mount Badyn Powell was reportedly covered with snow and ice. We knew Eric D had made it, but he's one of those legendary super hikers, so that didn't mean we would be able to follow in his footsteps.
The first five miles were dry and pleasant forest. There was a bit of a climb to get us right warm, and then we dropped down to Route 2 again. A worker there let us know that we did not have the option to bypass Badyn Powell on the road - part of it was washed out and too dangerous to cross even on foot. So onward!
The next two miles or so were also relatively clear, but around 8300 feet the trail was swallowed in snow.
We decided that rather than try to follow its meandering switchbacks, we would just go straight at 'em, and when right up a snow field. This was very tiring, but never scary. The snow was soft and Rapunzel (formerly Minda - she was named at dinner last night by the group of 14 or so through-hikers we were eating with, for her waist-long hair) showed us a better way to use our ice axes by jamming the handle straight in to the snow. That gives excellent purchase. Dan and I each used one trekking pole and our ice axe. We never did put our crampons on. They just didn't seem necessary.
Around 2 o'clock we gained the summit, which was free of snow. The views in all directions were incredible. To the north was a dessert valley far below, to the south the valley was still blanketed in cloud. Snow covered mountains reared their heads through the cloud to the west. The way ahead, eastwards, looked relatively snow free. We had lunch and a siesta on the summit. For once, it was almost a dead calm. Usually the wind screams at the peaks, but not today.
When we had rested enough we continued along a ridge to the east. There was a breathtaking drop to either side, with continual vistas, but again, the ridge was broad enough not to feel overly exposed.
We got a bit confused at Throop's Peak, and the trail dropped briefly to the north there, so we climbed a dry southern shoulder instead. We had thought it was Houghton, which would have put us quite a bit closer to our goal, but there was a sign when we found the trail again that put the campground 2.5 miles away.
That didn't seem too bad, but after a considerable time on dry trail, we found another sign that put it still at 1.7 miles off. ARRGH! While we were hustling to make it, Dan and I turned a corner and heard a scrambling to the left down the slope. Mountain goats! Three of them, the first with great massive horns. Dan snapped a picture but they moved so fast we might have missed them.
We continued on, buoyed, and reached the spring just before Little Jimmy Campground (who comes up with these names?), refilled our water, and headed into camp. The campground was decent looking but had signs posted everywhere prohibiting fires, despite the snow all around the edges. We picked a camp site and soon after another couple arrived on bicycles from the other side of the camp. Argentina went over and talked to them but the rest of us were too tired to be sociable. We only covered 14.5 miles, but between the elevation gain and the snow, it was a grueling day. We had the usual lentils with rice and deyhdrated veggies, seasoned with boullion, and for a special treat, cheese, for dinner, and pudding for desert. It was vanilla pudding. Who bought these things anyway? Where's the chocolate? Okay that might have been me. But I swore there was chocolate.