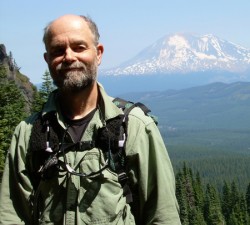 A little about me

I’m a 51-year-old analytical/engineer type who plans to thru-hike the PCT in 2008, Northbound. I live in the Puget Sound area, 20 or so miles ~east of Seattle in Washington state. Married, two grown daughters, all of us like to hike/scramble. My wife isn’t inclined to hike all of the PCT in one go; we’ve done pieces of the PCT, and I’ve done a couple of additional sections with some hiking friends from Wisconsin (Green Bay), but nothing to compare to a thru-hike.

The closest I’ve come was in the last couple of years: in 2006 my Green Bay friends and I section-hiked from White Pass south to the OR/WA border, about 150 miles, then after a week or so my wife and I hiked the Wonderland Trail, a bit under 100 miles circumnavigating Mt. Rainier. This all felt great, and encouraged me to consider something more ambitious. A friend who now lives in California told me that he plans to thru-hike the PCT in 2010 when he turns 50, and that really got me to thinking. You can read reports on my 2007 PCT prep hikes elsewhere (see link in next entry).

On the other end of the equation, I feel the clock ticking. My local hiking partner and friend passed away while I was in my prep phase for the PCT (in July 2007). Four years earlier he and I climbed Mt. Adams together, and he was stronger on that climb than I was --- things can change relatively quickly. For yet more contrast, my college roommate was on that same climb; Also in 2007 he climbed Mt. Rainier and Whitney and others as mere training climbs en route to doing the Matterhorn later that summer.

Anyway, I feel the urge.

For the first half of 2007 I focused on getting my gear together, really analyzing the heck out of what I carry and why I carry it (did I mention I’m the analytical/engineer type? :-)). Next came some shakedown trips to try out the exact gear configurations and see what does and doesn’t work well for me. Too many of these resulted in "lessons learned", but hopefully the lessons were learned and I at least won't fail due to anything I could reasonably prepare for.

My base pack weight in 2007 was about 14 pounds, but with some added items for longer-term comfort, safety, and communication the total is up to 18.5 pounds for what I'll carry from the start. Add more for the Sierras: extra clothing, possibly a lightweight ice axe & crampons, bear can, getting me to a base weight there of about 22.5 pounds, and then afterwards I'll drop to a somewhat more reasonable 17 pounds or so. Of course this will change as I adjust on the trip, but this should be ballpark.

My backpacking background: I "backpacked" some as part of Army training exercises in the 1970's and 80's, and recall not-so-fondly busting through dense woods with 60 pound pack, steel helmet and rifle, trying to move stealthily and avoid roads or hill crests, falling or crawling on ant hills or poison oak or what have you. My entire Army career consisted of one tour of duty in Germany as a young platoon leader and then company executive officer in a divisional combat engineer batallion during the cold war. A great experience including a lot of living in the outdoors, but not real backpacking.

I far prefer backpacking using modern lightweight gear, at my own pace, on a trail. Big surprise, eh? :-)

I've done various backpacking trips over the years, and a lot more dayhiking --- most typically along the I-90 corridor east of the Seattle area. I climbed Mt. Rainier once, but don't reckon myself to be any kind of a mountain climber (I certainly hope to include Whitney when in the Sierras though, and don't mind elevation/exposure in general).

I'm not the guy you want around in a medical emergency. I hope I would be competent, but I don't deal particularly well with blood or medical issues in general. If you get hurt around me I'll try my best, but please --- don't get hurt around me if you can help it! :-)

My trail journal was originally on trailjournals.com, but in at least cursory testing I found it slow and difficult to navigate from my smartphone --- I plan to update this journal myself, using that device. So I made the switch to here.

This is getting long, so just one last essential point: I'm looking forward to the PCT so I can eat as much as I want in trail towns. I'm not particularly fat, but a little chubbier than I'd like, and I find that the best weight loss plan for me is a week-plus backpacking trip eating about a pound of food a day!