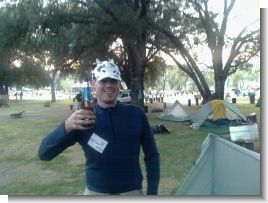 Good Times at the ADZ

Fun at the ADZ

It's been a fun day at the ADZ (kickoff event). As one would expect, the majority of aspiring through-hikers are younger than am I, but there are some more in my age range as well, including Pilgram, Greybeard, and I just had a great conversation with Marvin, an RN who lives in British Columbia. The picture is of a near neighbor here named Good Times, with his signature hat. I don't know if this quite captures the flavor of this place, but it seemed like a shot worth taking. Last year I read somewhat zealously through a lot of trail journals looking specifically for "lessons learned", and here's a minor one from me --- if I were doing it again, I'd either do some hiking before the ADZ (as most do), or just plan on one day at the event rather than two. A lot of the presentations are repeated, so a person could get the majority of them in a single day. I've enjoyed talking to various people here, but I find myself antsy to get on the trail, to get on with it. This isn't anxiety, rather "itchy feet". Intellectually, I know that they'll be very "well scratched" in the near future, but for now --- itchy. The weather is a dream, the sort that one feels homo sapiens were designed towards. Gets a little cold at night, but last night was actually not bad --- I think maybe a low of 40. It's just after 7 pm as I write this; the largest crowd I've seen yet is in the pavillion attending the presentation on "bears and fire safety". Given how different they are in parts of the Sierras it probably wouldn't hurt me to sit in on a discussion of bears --- so maybe tomorrow --- though I've encountered ursus minor (oso negro, black bear, texas tea, y'all come back now ...) in the wilds before. As I look around now I see a sort of delightful gypsy community scene of tents and the occasional tarp everywhere, few vehicles (all the 2008 thru-hikers are congregated together), people spread out talking, drinking beverages of choice, and an almost "hollywood would have added to the scene if this were a movie " hacky sack game. As it gets darker, folks will begin to hang out closer to their sleeping quarters, but most will likely stay up later than normal hiker hours. Still, by 10 pm it will likely be pretty quiet. One more day of --- on the whole very pleasant --- dallying about here, and then I begin in earnest. Bring it on!