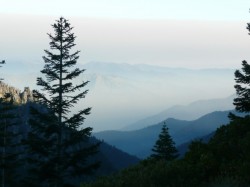 View from the climb out of Seiad Valley

Because we had camped on a ridge, we had light nice & early in the morning. We were out of camp as the sun rose, and headed down the trail, wearing all our layers for warmth, since we were on the west side of the ridgeline. After a few miles of descent to to creek, we climbed up and over a ridge with volcanic rocks on top that looked like they had to have been man-made because they were so large & seemingly off-balance. They looked like they should have been falling on us.

From the other side of the ridge, the trail wound around, over & down for several hours of walking until we finally got to Etna Summit. There a friend of a hiker behind us had brought cold sodas for us, and a local gave us a ride to town. Once in Etna, it felt as though time sped up. I went to the grocery store & library before running into two hiker friends, who told me that there might be a bus to Seiad Valley that afternoon, leaving in 1/2 hour. (Note from mom: 60 miles of trail north of Etna was closed at this time due to fire.) I raced to the Post Office, jogged up to an inn outside of town to pick up a UPS package as well, and made it back just in time for the bus. Five of us took the bus to Yreka, where the route ended, then I began hitching up to Seiad while the boys did their resupply shopping. I got hitches pretty easily, but unfortunately they all kept saying, "Well, I can take you halfway there." It took 4 hitches to get 35 miles up the Klamath River Highway, but I reached Seiad by 6 pm and was dropped off at the RV Park, where a gaggle of hikers greeted me. We spent the evening having a hot dog roast & celebrating how close we were to Oregon. At dusk, I decided to hike out to the trail to avoid the huge climb out of the valley in the afternoon heat the next day. This was a good plan, sort of. Negatives: the highway was pretty dark, and I walked about a mile on it to get to the trailhead, shaking in my shoes every time a car or truck passed me at high speed. Also, by the time I got to the trail, it was full dark. I put on my headlamp and began the mile climb up to campsite by Fern Spring. As I was walking, I began to notice a lot of greenery around me... poison oak. The leaves were everywhere, and it seemed impossible to avoid them in the dark. Thank goodness I soon made it to the campsite and found a spot to sleep that had no bushes around it.