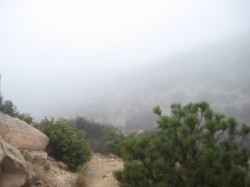 Fog in the desert?

Idyllwild is a vortex. It just keeps sucking us in. Yesterday we're took another zero-day here, for reasons which will shortly become obvious.

We left Idyllwild on 5/23, intending to make up the miles we had skipped with by hitchhiking in with Gustavo. Dave (an Idyllwild Trail Angel) dropped us off at Paradise corner in the morning, and we set off. Once we gained some elevation, the PCT became very foggy and damp. After a little more, the snow started. For the most part, it was pretty patchy, light snow, but soon it became heavier, and then the wind started. We kept going without too much of a problem for most of the day. our shoes were soaked pretty early on, though, and underneath our rain gear, our clothes were also wet. We were doing okay until we hit the burn zone. This is a really fresh burn, just a few weeks old. They were turning hikers away very recently. You can still smell the char in the air, as well as see it all around you. Here, there was no cover, the wind was howling, and the snow chose to kick itself into overdrive. We decided that it was now unsafe to continue any further, and so had to backtrack about 3 miles to a site that was safe to camp at.

We made camp a the junction of a few trails where the snow was a little lighter. We found an old dome tent in a hunting cache there and threw it together because the winds were till pretty strong, and we still didn't quite trust our tarp under the conditions. Once I actually got in the tent, we began to realize our mistake. the tent was your average $ 30 Walmart tent, it was full of debris, had holes in the walls from where a mouse may have gotten at it, and the wind was pushing the moisture right through the rainfly. So even though we had already peeled ourselves out of our wet clothes and leapt into our lovely dry clothes, we decided that our tarp was probably better, and that we should set it up instead. We had to get back into our wet clothes, haul the other tent out of the way, and set up the tarp in its place, all without freezing to death. Did I mention we were cold and wet? because we were. Really cold and wet. But we made the right decision. Once the tarp was set up, it was much, much better than the tent would have been. and I discovered something about the tarp that makes it much more attractive to me: you can cook in it. Brent cooked up some dinner right from the comfort of our quilt, and we ate it the same way. I like it so much, I've been asking to do it every night. This was my first near-hypothermic experience, and I've made Brent promise that he will try not to repeat it. Kids, don't try this at home. It's not fun.

The next morning, we started off again, back in our still wet clothes and shoes from the day before. Hiking was really slow in the snow, but at least it wasn't dumping any more. Most places had about 4-6 inches of snow, and there were no tracks to follow. Brent was breaking trail for almost 10 miles before we met another thru hiker, Phew!/Gail, coming from the other direction. We were able to follow her tracks the rest of the way to the trail down to Idyllwild. She is much tougher than I am. She was hiking through the snow on a broken ankle. Eventually, we made it back to town, and procured the last available cabin in the whole city (there was a massive influx of tourists for the Memorial day weekend, and very little was available).

We spent the day drying out our gear, and not being able to find anyone we knew through the tourists. We saw the new Indiana Jones movie, which was fun, if a little overdone. I guess you don't go to those movies looking for a nuanced cultural perspective, though.

Back on the trail this morning, heading for Big Bear City! Wish us luck!