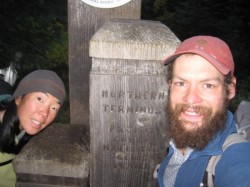 We crossed the Canadian border at 7:30 am. Dang, was it cold! But as a bonus, when we got there, we discovered that Treebeard (who had finished the previous day with his fiance, Makela) had left a little bottle of Scotch in the monument for us to celebrate with. And really, what says congratulations more than Laphroaig at 8 in the morning? Finally got to Manning park resort just in time to miss the bus into Vancouver, so we all ate lunch with Six and Spiff's respective dads (John [who teaches economics and finance] and Charles [who teaches genetics] - we should have a "Fathers who teach at large universities with thru-hiking offspring" convention!).

It turned out that there wasn't enough room in the car for all of us, so Brent and I stayed at Manning park, and Gerry and Michelle went with Six and Spiff. We were thinking of getting a room at the lodge, but it was still such a nice day that we decided to try to hitch out for a couple of hours. As it turned out, we were picked up within 20 minutes by another bunch of recently finished thru-hikers (Steamroller, Hatchet, and Prof. Party-tent) who we had never met before. They took us to Hope, and from there we got another ride into Chilliwack. Since it's harder to hitch the closer you get to a big city, we just decided to take the bus into Vancouver, where we stayed at a Westin (courtesy of Brent's Starwood points).

kim (who will be walking much less now...)