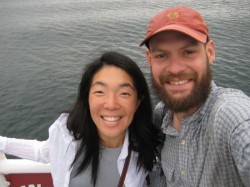 Well, the journey is officially over, I guess, but I'm finding it difficult to stop blogging. I hope this isn't a new addiction.

Anyway, putzed around Vancouver until 3ish, when it was time to head to the train station to catch our bus. As soon as we were back in the States, we called my cousin, Cecily, who is letting us crash at her place while we're in town. She and Dustin came and picked us up at the train station, and we began the reintegration process. We even guest starred in her blog! you can find our entry here: http://hitosea.blogspot.com/

Since we're officially back in the US (and off the trail!), the updates will probably be less frequent. I'm still planning the list of hikers we met and their blogs, and it sounds like Brent has an idea for one more entry too. So we're not quite finished yet, but soon!