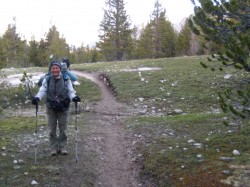 Getting started in the morning

Three big passes in 3 days and for the first time I thought about leaving the trail. I continued to hike with the group that I conquered Forester with.

Tailwinds planned to meet her boyfriend at Vidette Meadows. We were a day late and she had left a message via satellite phone and she was hoping he got it. Fred was coming in on horseback and they planned on spending 1 or 2 nights together camping. Others were going into Independence or Bishop.

We arrived at the Bullfrog Lake trail which would take us over Kearsarge. This is a pass you must cross to exit the PCT, not actual trail miles. It is often necessary to go off the trail for resupply but not usually hiking over a high pass to do it. Kearsarge is at 11,845 feet. The off trail miles were 7.1 one way.

Tahoe Mike stayed on the trail and took half a day off relaxing since he had made provisions for Fred to bring his resupply package on horseback. When we met up with Fred we also met up with Southern Man who had hiked with this group before.

The Kearsarge Pass hiking crew wound up being Veg-a-Matic, Blue Butterfly, Southern Man and myself. Butterfly had made the decision to leave the trail due to aggravation of an old back injury. She felt good about her hike and her decision to end it.

My feelings were certainly colored by her decision. My sisters would meet me in Independence and we planned on spending two nights in Bishop. It would be easy to just go back to Vegas with them and fly home.

I arrived a day earlier than I had planned. Fortunately I was able to use Tahoe Mike's satellite phone to call Diana from the trail junction. She wasn't sure she could get away a day earlier. I told her I would call from Independence prior to checking into a motel.

We got over the pass and used Fred's truck which he had unhooked from the horse trailer to drive the 10 miles into town. Independence is tiny - 2 motels, a B & B, convenience store, post office and Inyo County Courthouse. Butterfly's hiking partner had secured a room for herself, vegamatic and butterfly - the Courthouse Motel was full. Slo and Shake were there and it was great to be greeted by Shake. She always makes me feel good about the hike.

Southern Man and I tried the motel down the street, again, no vacancy. I hadn't reached Diana yet. Instead of checking into the B and B I walked to the pay phone at the convenience store and called her. The connection was short - she was driving and on her way to meet me - I was elated! She cut out. I called Michael. He had spoken with her and she expected to arrive around 6. I left the message that I would hang out at the Courthouse Motel in room 11 with Butterfly and company. It was HOT! Temp must have been near 100.

I dumped my pack and poles which I had retrieved from the back of the pickup and walked back to the convenience store where I procured a strawberry ice cream bar, bottled Starbucks Frappacino and a bag of Smart Popcorn. Back to room 11. I bid farewell to Shake and told her I would not be around for the cook out since my sisters were arriving.

By the time Diana and my sister Patricia arrived, whom I wasn't expecting, I was parked under the lovely shade tree on the courthouse lawn. I didn't know if they had gotten my room 11 message and wanted to be visible to them. Indpendence has a main street which is Route 395. They met a few hikers and then we were on the road.

At about 6:30 they whisked me away to Bishop 42 miles north, a shower, a great dinner at the Whiskey Creek and a bed. I was in heaven.