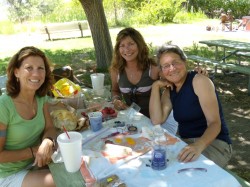 Picnicking at the Eastern California Museum

The Eastern California Museum is located in Independence, where I came off the trail, 42 miles south of Bishop. After a morning of listening to the swim meet, eating another breakfast at the hotel, we packed a picnic lunch and headed for the museum. We had read it had a great exhibit on Manzanar, one of the Japeneese Internment Camps during WWII.

The material here was fantastic. I do have to say, a bit stomach turning. Manzanar was south of Independence and north of Lone Pine. In the ealry 80's the museum was approached by one of the surviivors of Manzanar; a man who had been married while there to the "Nightengale" of the camp, offering to put together an exhibt for the museum. He collaborated with the museum director for a couple of decades. There was a recreation of a portion of small apartment, dishes, many photos of residents. It was difficult to believe that we locked people up out of fear. I am sure you know many of these people were citizens of the US who were ripped from their homes and communities to be incarcerated in the camp. We even asked young men from the camp to then serve in the US military. If you would like to learn more check out these sites: http://www.nps.gov/manz/; http://www.owensvalleyhistory.com/manzanar1/page10.html; http://memory.loc.gov/ammem/collections/anseladams/

Some of it was reminiscent of many people's attitudes today toward people from Iraq, Pakistan and Afghanistan. It was a bit ghastly.