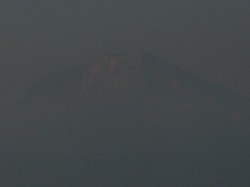 Mt. Lassen through the smoke

Shade of a water cache

After 6 miles we arrived at the highway 22 water cache. This was a bit like the Oasis Cache in Southern California maintained by the Anderson family. The family maintaining the cache had created a shade area with tree branches supported by a rooted pine. Four chairs graced the lounge and there were many gallons of water to be had. I arrived with Paranoia and Miss Potato Head already relaxing. The next water was 13 miles up the trail. It was going to be exposed and hot so the drill is always how much water do you need.

Hiking was slow. The trail was littered with large and small bits of lava rock, sharp and hard on the feet. At this time I am hiking with inferior gel insoles. When I had swapped boots for tennis shoes in Chester I forgot to take my superfeet insoles out of my boots before sending them home with Ann. I was forced to go to the local supermarket and choose something else since I had stripped the insoles out of these shoes when I originally got them in Wrightwood. My feet were sore and developing new blisters between the toes and on my big toe.

We arrived at Rock Spring around 5. Don Woods and horse were there with no way to cross the Creek, which was more like a river. The PG & E bridge near the powerhouse was closed. Fencing laced to the bridge prohibited entry. A sign reading "No Foot Traffic" was posted as well as one threatening porsecution for violators. We thought we might find a narrower and shallower crossing upstream. There was a large pipe, 4 feet in diameter, entering the power plant from the hill. Fortunately for us there was a style over it. This did not help DonWoods and his horse. When we got to the other side we still saw no way of crossing. In addition signs read, "Electric power released into the water regularly." Swimming seemed out of the question under the circumstances. Paranoia continued to explore options near the pipe. Miss Potato Head and I resolved to climb over the fence and cross the bridge to get to the other side.

Once we crossed Paranoia came out of the bushes on the other side having found a catwalk that parallelled the pipe where it crossed the river. Again, not helpful for Don Woods and his horse. We were on to the fish hatchery, a dinner break and water from the red hose as described in one of our guidebooks. It was nice to eat at a picnic table, have flush toilets, etc. We hiked on after dinner until 9 trying to get within 8 miles of Burney Falls State Park. I had my first night of cowboy camping, no tent, under the stars. The stars were gorgeous. At about 1 a.m. I awoke and noticed the sky was lighter and the stars not as visible. The moon had pushed them out of the way and was lovely in its own right.