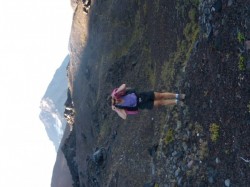 After lava climb with N. Sister behind

Our day started with a steep climb through lava. We both had a hard time envisioning where the trail was going ahead. It was hidden by large lava rocks. There were many switchbacks which aided in the grade though still rigorous. Now North Sister was ever present ahead of us or on our right. As far as Shelley was concerned it was unrecognizable since our orientation was one rarely depicted through photographs and non existent from the highway vantage point.

After the lava climb we were rewarded with a delightful meadow and rippling stream. We gathered good fresh water while we could. Later in the day we would come to 16 mile waterless stretch. Shortly after the meadow we met 5 hikers from Seattle - 4 women and a man. They were on a 5 day trip with the intent of doing some climbing. They had even come equipped with their ice axes. They had come south to Oregon because the weather in WA had been too miserable.

Our lunch stop once again consisted of brie this time spread on tortillas.

It's Labor Day weekend so we are meeting more hikers than usual. We stopped at Lava Lake Campground for water - we strongly recommend against camping there. It is tiny and noisey. We think folks would be better off staying home.

After the campground we accomplished the first real Lava rock walk - no smoothed over section here just chunks of lava - the guidebpook refers to them as lava blocks - for the next 1.5 miles until the McKenzie Highway. Our afternoon break was after the highway and the trailhead where a number of dayhikers were parked.

The next section had us climbing to a spur trail to Little Belknap summit - 900 feet in 2.3 miles- once again on lava trails. Once we reached the summit we had about a mile of forest floor and campable area before we reached a lava flow and an area too rocky to sleep on or pitch a tent.