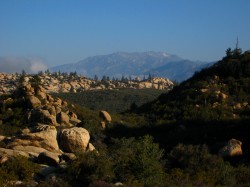 Notes to Self For Next Time

It was very damp and cold when I got up this morning. The inside of my tent was covered in condensation, and the outside was covered in frost. Once again, without waiting for breakfast, I threw everything in the pack and hit the trail to get warm. A mile or two past the highway, I met Headinout and Tagalong, who were just packing up camp. I met them a few days earlier in Warner Springs as I was arriving. They weren't planning a 20-mile day and won't get to Idyllwild until Tuesday.

The trail was surprisingly rugged as it climbed a long ridge toward the conifers visible in the distance. The major problem with the route was water. There are three or four good springs, but they are all more than a mile off the trail and involve a significant elevation loss. If I had read the guidebook more carefully, I would've carried an extra 2 liters from the highway to avoid having to make a detour. After looking at the map and guidebook, I decided to try a seasonal stream near Forbes Gap that was only 1/2 mile off the trail, with only a few hundred feet loss. The stream was running with clear, cold water.

After topping 7,000 feet elevation for the first time on the PCT, I ran into the first snow. On the north side of Apache Peak there were five or six steep patches covering the trail. Most were only 20 to 30 feet across, but they were very steep (45o+) and icy in spots. I was really regretting putting my crampons in the box for Kennedy Meadows. But I made it across safely by scrambling around the patches I could, and carefully picking my foot placements on others.

Just like the previous two evenings, the wind increased as the evening got colder and low clouds began to form on the peaks. I found a flat spot nestled in the brush and made camp at about 6PM. My campsite was fairly sheltered, but the wind rushing through the trees sounded much like a jet engine.

My tent was still soaked from the previous night, so I decided to cowboy camp.

It's only 7PM now, but I'm already in the sleeping bag to keep warm. A hot shower and warm bed in Idyllwild will feel really good tomorrow.