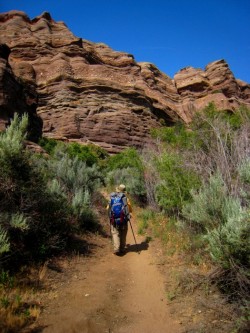 From Giant Lizards at Vasquez Rocks to Hiker Heaven

Happy Mothers Day, Mom! (and to all the other moms out there!)

I left Mattox Canyon early, expecting a hot trip into town. It was very damp down in the canyon, and my sleeping bag was soaked on the outside; the down stayed dry, though. I had my alarm set for 4:30AM, but I didn't get out of the bag until about 5:15. I saw Zoner pass by on the trail, and I left 15 minutes later, followed shortly by Gabe (who's trail name is now San Gabriel).

The trail climbed steeply out of Mattox Canyon, but I kept my jacket, gloves, and fleece hat on to ward off the pre-dawn chill. I got to the ridge top with San Gabriel just in time to see a pretty sunrise. The next few miles of trail wound through unburned chamise and chaparral, descending down to Soledad Canyon Road. Right next to the railroad tracks we passed a small monument commemorating the completion of the last section of the PCT.

The next section of trail would have been very unpleasant on a warm afternoon, but I was making the climb before 9AM. The ridge had some spectacular sedimentary rock formations. Once over the top of one last, tall ridge, San Gabriel and I hiked down to Interstate 14, then underneath it through a long, dark tunnel. Beyond the tunnel, the trail wound through the canyon at the famous Vasquez Rocks where many movies and TV shows were filmed. (For all you Trekkies out there: remember Captain Kirk fighting the Gorn in the "Arena" episode?).

We met Zoner, who was relaxing in a picnic area in the regional park. It was a short walk into Agua Dulce where the Sweetwater Cafe was doing a bustling Mothers Day brunch business. There was a large empty table on the porch - perfect for stinky PCT hikers to enjoy a well-deserved brunch. Franko (now Frankosaurus) and Zorro were only 30 minutes behind and joined us for a relaxing meal.

I'm now at Hiker Heaven, which is run by the Saufleys. Hiker Heaven is an informal hostel run by true trail angels and very generous souls - Jeff and Donna (who goes by L-Rod). Nearly every PCT hiker who makes it this far spends at least one night at Hiker Heaven. Behind the Saufleys' house is an old mobile home called the "hiker hut" with a kitchen, living room, two bedrooms, and a bathroom/shower. There is also a small Class A motor home that accommodates a few hikers. Under the trees there are three large bug tents with comfy cots.

When you arrive, L-Rod starts you on the routine... put your pack down, select some clothes from the rack and a towel, put all of your stinky hiking clothes in a basket and leave it in the garage (L-Rod insists on doing all the laundry), hit the shower, then relax. It is really fun here with a small crowd. There are 13 hikers and 3 trail crew here tonight. When the herd gets here, there could be up to 50 hikers per night. The Saufleys are true angels for putting up with that much chaos. Thank you, Jeff and L-Rod!

The five of us went to the grocery store and pooled our money to get all the makings for a BBQ dinner of burgers, salad, and nachos, which we put together at Hiker Heaven. It was delicious. Just after sunset, the fog made its way in from the coast, which is common in May and June according to the locals. This would be good hiking weather, but unfortunately the forecast is for 100 degrees for the desert later in the week.