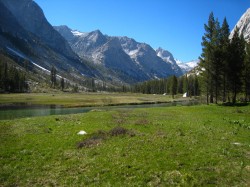 The day started out pretty uncomfortable, but it turned into one of the nicest days I've ever had in the mountains. It was really cold when I woke up. I was plenty warm in my sleeping bag, but my water bottle that was in the vestibule of my tent was half-frozen. Then I discovered my shoes, which were wet from yesterday, were frozen too. They were hard as a rock! After packing up, I attempted to put my shoes on, but they were too stiff. It took 10 minutes of pushing and pulling and wrangling, but I got them on. My toes instantly went numb.

I was expecting more clouds and stormy weather today, but instead it was crystal clear, calm, and frosty. I headed up the hill towards Mather Pass to get warm. After about 30 minutes, my toes were beginning to come to life when I hit the first obstacle. There was a creek 8 feet across and 2 feet deep - and not a log in sight. There were rocks poking out of the water, but they were covered by a half-inch of ice. I didn't see any way around it, so I plunged in and waded across. The sun was still hidden behind the mountains, and the air temperature was probably about 25F. The water temperature was as close to 32F as you can get. I thought my toes were going to crack and fall off. How can numb toes be so painful? [Now that's an interesting question. "If they are numb, how can there be sensation? " the always-inquisitive Bb wants to know] I marched up the hill. My feet felt like wooden clubs sloshing in spongy running shoes. Fortunately, in about 10 minutes the sun appeared. It was much more pleasant after that, hiking mostly on very firm snow past the last few clumps of white bark pines.

I almost stepped on a pair of rock ptarmigan. I jumped like there was a rattler at my feet! Ptarmigan have very good camoflauge when they are in the rocks. I forgot to mention I saw a pair yesterday. They are very brave (or stupid) and stood 10 feet away, clucking, while I took a picture.

Continuing up the hill I got to the base of Mather Pass at about 9AM. Compared to yesterday's pass, most of the switchbacks were covered by a large snowfield. I stopped to put on my crampons and swap my hiking poles for my ice axe, then headed up. Someone had gone through in the afternoon (probably yesterday) and kicked in great steps, traversing all the way up the steep snow. The snow was firm, but not icy, so I was very grateful to have the steps.

I paused on top to admire the view before heading down towards frozen Palisades Lakes. As the name would imply, the lakes lie on the west side of the towering Palisades, which contain many of California's 14,000-foot peaks. It is truly a spectacular place.

The snow descending was still too firm for skiing or glissading, so I picked my way carefully down with crampons and ice axe. The snow remained pretty solid until just above the lakes, when I found short stretches of trail melted out.

Below the lakes, Palisades Creek tumbles down a huge series of cliffs, while the trail switchbacks down in an infamous stretch called the "golden staircase." After an hour of knee-jarring tedium (but with great views), I reached the valley and a nice grove of trees near Deer Meadow.

The contrast was astounding. Three miles up the trail was a winterland of snow and ice, then suddenly there were trees and aspen leafing out. In the meadows, the grass was green and some shooting star were starting to bloom. It was also a spectacular blue sky day without a hint of cloud anywhere. I think the air temperature must have been 60F as I was taking a break. The almost summer-like bliss continued all the way down Palisade Creek to the Middle Fork of the Kings River in LeConte Canyon. Only the size (and roar) of the river reminded me it is still spring.

LeConte Canyon is one of the gems of the Sierra. It has a great river, lovely stands of trees, and soaring granite, glacier-sculpted peaks in every direction. I took my time enjoying being in such a special place. I stopped for an early dinner near the Dusy Basin/Bishop Pass junction. Fortunately, there was a bridge over the Dusy fork of the river. It would have been hairy to cross. LeConte Canyon must be home to a large deer population. As I was cooking dinner, three does wandered in and would have stopped to munch on my gear if I hadn't chased them away.

After my early dinner, I headed up-canyon to make tomorrow's climb of Muir Pass a bit easier. I'm camped in Big Pete Meadow in a nice grove of pines with lots of flat tent sites. I just made hot chocolate. I swatted a few mosquitoes; there aren't too many around, though, as temperature is starting to drop.

I haven't seen a soul since leaving Woods Creek yesterday morning. It's nice being solo in such a spectacular place. In another month, this canyon will be teeming with backpackers.

That's all for today. Two more high passes before Vermillion Valley Resort and one big river.