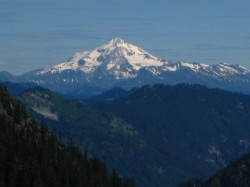 I had to make a big decision about what route to take this afternoon, but more on that later. It was really frosty this morning and I didn’t want to leave my warm sleeping bag. However, there were still 200 miles to go and only seven days to do it. Lucky and Milky were already up and started down the trail a few minutes before me. Once again, there was a bunch of wet overgrowth on the trail that got my legs and feet soaked as the descent continued.

A few miles later, there was a medium-size stream that had washed out the trail during a storm last year. I scrambled down the bank and hopped across the rocks over the muddy water. I shouted back to Lucky that the rocks were pretty slippery, but he didn’t hear me over the roar of the creek. Sure enough, he jumped to one of the larger rocks and slipped off into thigh-high, chilly water. Other than wet feet and legs, Lucky was OK. Milky and Lumbar showed up and picked an easier crossing just downstream.

The first climb of the day started shortly after the creek ford. It was a fairly easy traversing climb to wooded Deception Pass. Milky was right behind me as we made another long, forested traverse. A second climb followed, this one much steeper and longer. I was starting to get hungry but was determined to get to the top before taking a break. We passed a few backpackers on the climb and eventually reached Pieper Pass (the highest point on the PCT in this section at 5,920 feet). We stopped for an overdue mid-morning break and waited for the others to catch up. Soon, Lucky, Slim, and Lumbar came puffing up the hill.

After our 2nd breakfast, there was a repeat of the earlier hiking with a wooded traverse and another steep climb (this time to Trap Pass). We stopped for lunch at the pass and admired the view of Glacier Peak to the east. It was only another 12 miles to Stevens Pass and Highway 2, but it seemed much longer than expected. There was one very steep climb and a few nice lakes before I reached the ski lifts above the highway.

At about 5:30PM, I finally made it to the parking area next to the highway. I stopped for a break and waited until the rest of the gang arrived a few minutes later. They were all hitching into Skykomish (a dozen miles to the west) for a resupply stop. I was heading on, but had to decide on a route.

In the fall of 2003, a major storm washed out some large portions of the PCT on the flanks of Glacier Peak. The trail still has not been repaired. I have three options. First, I could follow the officially closed PCT. I talked to several southbound hikers who had made it through. There is a scary river to cross (the Suiattle River) on a slender log high above the cascades and there are about 12 miles of trail with countless blow-downs and very slow travel. Second, there is a hiker’s alternate route that circles the mountain to the east. This route is significantly longer than the PCT and involves several very rugged and long climbs in and out of deep valleys. Third, there is an equestrian alternate route that follows roads for 40 miles before joining the hiker reroute on the northeast side of Glacier Peak.

One more factor in my decision was a weather report of another storm heading my way on Sunday or Monday. Since I’m getting very short on time to make my flight home next Saturday, I chose the fastest alternate route and headed down Highway 2 to the east on the equestrian alternate.

The worst part about the alternate route is that it follows busy Highway 2 for 20 miles to the east before turning north on quieter roads. The first few miles weren’t too bad. There was a lot of traffic, but the shoulder on the highway was pretty generous. After about 3 miles, I jumped off the road to find a flat spot to camp in the woods. The pickings were slim, but I managed to clear a small spot several hundred yards off the highway.

That’s about it for today. I’m looking forward to getting home next weekend,