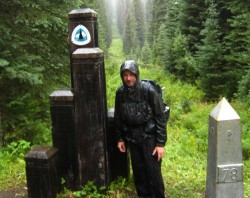 I woke up really early this morning, eager to get to the border. My goal for the day was to make it to the monument (about 30 miles) and camp there, leaving about 10 miles to do on Saturday morning. It was cool and rainy (big surprise) as we climbed above Harts Pass.

The hiking was very scenic as the trail traversed along open slopes with dramatic clouds on the peaks and in the valley bottoms. Greg was a bit miserable last night…he’s using a tarp instead of a tent, and most of his gear is wet. As we hiked, he mentioned the possibility of hiking all the way to Manning Park (and a warm hotel room) tonight. I laughed it off as fantasy. It would be a 40-mile day over rugged terrain, and the odds of a vacancy at the lodge on Labor Day weekend seemed remote.

Like the last few days, there were some welcome spots of sunshine around mid-day. We stopped for lunch and enjoyed views of high meadows and hanging valleys among the glacially sculpted peaks. In the mid-afternoon, we passed the high point of the PCT in Washington (7,120 feet) and started a long, gradual descent towards the U.S./Canadian border.

After passing very scenic Hopkins Lake, the rain started again. The rain became steady, then heavier, and heavier as we slowly approached the border. In the last months, I had been fantasizing about reaching Monument 78 and the celebration I would have. I would stop, take lots of pictures, reflect on the entire trip, and take the time to sit and record my thoughts at the moment. None of my fantasies involved heavy, cold rain.

It was raining as hard as I’ve seen it, and I was miserable when we arrived at the border at around 6PM. The rained had worked its way under my rain suit and I was damp all the way the skin. I hastily signed my name in the register and we snapped a few, pathetic pictures before continuing in the downpour. A half-mile later, we got to the camping area and had to make a decision. We were tired and cold, and it was another 9 miles to Manning Park Lodge. It would probably take three hours to hike in and there was about 1½ hours of daylight left. Or we could camp in the rain. It didn’t take much thought to decide to keep going.

We pulled out the headlamps at 7:30PM and kept hiking in the rain. At about 8PM, the batteries in my headlamp quit. The spares were buried in the bottom of my pack and I didn’t want dig them out in the rain. I pulled out my backup keychain light just as Greg’s headlamp failed from an electrical short. Using the surprisingly bright spot from my tiny LED light, we stumbled the last 3 miles to the road.

The rain stopped as we trudged the last mile on the road to the Lodge. Just after 9PM, we found our way to the lobby, desperately hoping there would be a room available. Greg got to the counter first and stated “We’ll take anything…I don’t care what it costs.” We must have looked pretty miserable standing there in our dripping gear (and ripe-smelling too). There was a deluxe room available with two king-size beds! Greg insisted on treating for the room.

Shortly, we were in the room with the heat cranked up and unpacking wet gear. I’m really glad we didn’t try and camp in the rain. Most of my gear managed to get wet inside my pack (including my sleeping bag) in spite of being packed in garbage bags. After a hot shower, I used the room phone to call Boulderbunny and tell her I made it. I think she was surprised and relieved that I made it to Manning Park a half-day early.

It was a really long day. If you add in the extra mile of hiking on the road, we did over 40 miles in the rain across some pretty rugged terrain. Unfortunately, the restaurant is closed for the night. I’ll have to make do with whatever hiking food I’ve got left until breakfast tomorrow morning.