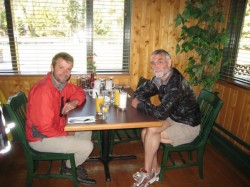 Greg and I were the first in line for breakfast when the restaurant opened at 8AM. I was really hungry but quickly got full. My stomach must have shrunk in the last month on the trail. The bus to Vancouver wasn’t scheduled to arrive until 11AM, so we had a few hours to kill. After another hot shower and packing up my mostly dry gear, we went out to the lobby to wait for the bus. It was cold in Manning Park, but much sunnier than the last few days.

I was still in a bit of a daze from the long day yesterday, and the reality of reaching Canada hadn’t fully sunk in. My feet were sore as usual. Other than that, I arrived skinny but in good health. The Greyhound bus showed up on time and we settled in for a long ride. I dozed and watched the scenery as we drove down the Frazier River valley. At one of the longer stops, I hopped off the bus to buy donuts at Tim Horton's…they were very tasty. The rest of the bus ride seemed to take far too long, but we finally made it to the Vancouver bus station at 3:30PM.

Just outside, Greg and I caught a taxi to the airport. Twenty minutes later, Greg headed off to buy a ticket back home to Portland and I was in line at Air Canada. The security line and U.S. emigration was surprisingly quick. My flight wasn’t until 7PM so I had a few hours to kill. I searched for a real restaurant with sit-down service, but the only options in the terminal were typical airport fast food stalls. I settled for Chinese food.

My flight home was nearly empty…only six passengers on the fifty-passenger plane. Just 90 minutes later, I was walking through the airport in Sacramento. Coming down the stairs from the concourse, I spotted Boulderbunny, Aunt Sus, and Uncle Rik waiting for me. I wasn’t expecting a welcoming committee, but it was a nice surprise. Rik and Sus brought delightfully tacky plastic Hawaiian leis, some of which had flashing LEDs.

My pack showed up undamaged five minutes later and by 10PM, I was home in Cameron Park. Just over 24 hours ago, I was hiking through a miserable rain storm on the PCT. Now I’m home and the hiking is done. It doesn’t seem real yet, but I’m looking forward to a long rest.

Thank you for reading,