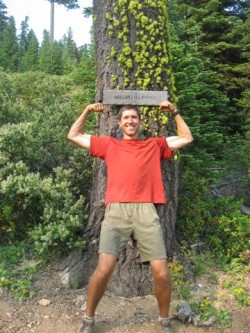 Steve's too huge for California

Another new month, and Steve is STILL hiking. Depending on trail conditions, Steve may actually finish the PCT this month, although I think it is more likely that he will finish the first week of September. It blows my mind that Steve has been walking since April.

Steve picked up some packages at the Elk Lake Resort yesterday morning and I spoke with him briefly. I thought he'd sound miserable as a result of the swarming mosquitoes, but he sounded very happy. He had breakfast with Scott and Joe, two guys who are trying to set a PCT speed record this year. Scott and Joe created some controversy last week by hiking through a section of the PCT which was officially closed due to a fire. Steve said that they were both extremely nice guys.

Steve should reach Big Lake Youth Camp today, which will also mark the 2,000 mile mark of the PCT. Only 600ish miles to go! Should be interesting to see what kind of miles Steve covers in the snowy conditions ahead. A lot of hikers say that 40-mile days are possible in OR, but I don't think that's realistic with the snow coming up.

I'm posting some pictures from a few weeks ago. Once Steve is home, we'll actually sort the pictures out and post them on the days on which they were taken. For now, I figure that people won't be going back to read old journal entries, so I'll keep adding old photos to new journal entries.