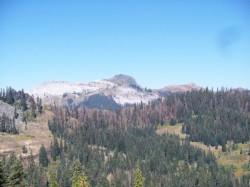 The marble mountains were great. Left Etna on Wednesday around noon where a nice lady drove me up to the summit. I didn't really have to hitch out of Etna. She knew I was going. Halfass sticking my thumb out as I got to the road I was in the car and heading up before I was even quite ready. Fires still going in all the closure areas so far, there was lots of smoke. I was a little disappointed that I might not be able to see much of the marbles in all their glory. Got about 10 miles done and camped in a nice ring of trees. The next morning I ran into the three southbounders that I ran into in Washingtons Trout Lake. One of them recognized me and we chatted for a short time. Realizing that I was still quite a ways away from Seiad valley I picked up the pace. The wind had shifted at night and now the views were clear and very very beautiful. Met a few Elk hunters on horses and also found a nice cabin along the way. Ran a lot on the downhill section. It seemed like about 8 miles of downhill that was so nice. Someone had been doing trail maintenance that was some of the best I've seen anywhere. Didn't see anyone but when I came across the chainsaw I realized why it was so nice. I hit the river at the bottom of the decent as it was getting dark and didn't realize how far it was to the road. Decided that instead of camping because it was late I would just night hike into town. Quite a few miles following the river I got to the road and remembered it was still a 6 mile road-walk into town, decided to camp and do it in the morning. Besides there was a campground here with a bathroom. Mice were running around all night but thanks to the mouse proof tent I had, no problems. A dog like animal woke me up in the morning as it trotted around the tent, rustled up leaves and making noise as it went. Didn't see what it was but packed up and started walking. I was now within what most of us call crawling distance. The distance from the finish that if you broke both your legs, you could still crawl to the end. 6 miles was my crawling distance, however being that it was a road I think I had quite an advantage to most peoples decided distance. Took some movies of the geese flying along the river and some photos of signs I also was listening to music for the first time all week. Not quite sure why but I only listened to it when other people were around. Being alone all week I hadn't listened to it at all, until now. The road walk was very nice. Past houses and met some dogs along the way. Huge bunches of blackberry bushes and the river noise in the distance. I walked into Seiad Valley taking a few more photos and emotional that I was all done. I had done what I set out to do.