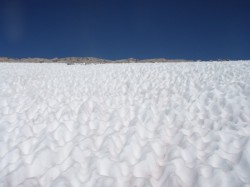 The morning started with an early rise and me heading to Donohue pass. It actually warmed up pretty early and was a nice hike up to the pass area. Once I started getting near the pass it became snow covered and the trail was difficult to locate.

At the first location where I truly lost the trail in the snow I met up with another hike I know. He said he knew were the pass was and headed up so I followed him. We went straight up the ridge and by the time I caught up with him he was checking his map and said it was just on the other side of the ridge over yonder. I followed him there while trudging through some pretty awful suncups. When we got to that ridge, we still couldn't find the pass. He pointed out Mt. Donohue and we looked at the map together. With us where we were and Mt Donohue where it was it was obvious we were on the wrong ridge so we headed over to another ridge - again through massive suncups. When we got there we still could not find the pass.

At this point I was very tired and somewhat frustrated. I took a minute and sat down with the map. I then broke out the compass and took a couple of sightings. It quickly became obvious the the mountain we were using as Mt. Donohue was not Mt. Donohue. Once we Identified the correct landmark we figured where the pass was suposed to be. Of course it was back by where we first started when we went astray.

So we took a long suncup and occasional postholing trip back across the bowl and sure enough there was the pass. All in all we wandered almost 2 hours through difficult terrain because I didn't check the map - just followed someone. That was a lesson learned for me. Check the maps and use your compass.

After the pass was summited the trip down the other side was slow and arguous as that side was also snow fields with large suncups throughout. Suncups are formed when the sun partially melts the snow in leaves the snow with all these peeks and valleys that make waking over it very tedious and tiring.

After getting down to a lower elevation the rest of the day was a very level a walk down next to a river. This went on for miles until I reached Tuolumne where they have a small store with a post office. I picked up my resupply box and grabbed something to eat. The store closed at 5 PM so I wasn't able to go through my resupply box before they closed. I have since, and will have to buy additional food to get me to the next stop. I'll do that in the morning now that I've figured out what I need.

I am staying at a campground here. They have a backpacker area that cost 5 dollars a night if you are a Yosemite backpacker (which I now am). In my resupply I also got my maps and info for the next section so I can plan that now.

For breakfast I had Grape Nuts. For lunch I had brushetta on tortilla's and salami. For dinner a hamburger and yogurt and ice cream.