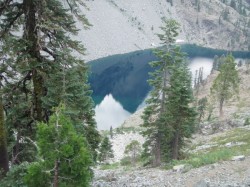 Got a moderately late start on the trail this morning - didn't start hiking till 10 AM.

Got up late as one of the hikers staying here had to pick up and drop off a package at the post office and they don't open till 8:30. When he had all the mail stuff squared away we got a ride back up to the trail.

The trail started with an uphill but then leveled out. Around 11 AM I started hearing slow rolling thunder from the few dark could there were. I sprinkled for a bit but the thunder continued for hours. I never saw any lightening.

Hiked through the Marble Wilderness. I did see some marble but mostly saw granite. Passed several beautiful lakes and some nice rock formations.

Late in the afternoon I turned a bend when coming around a mountain and off a little in the distance was smoke from a fire. My first thought was that we had a lightening strike and it started a fire. I went on a bit and met Birdman who was looking at the map. It looked like the trail was going to head for the fire but it was possible it could just miss it. We headed on. After a while it became apparent that the trail was going directly where the fire was. This made it seem doubtful to me this was lightening caused, what are the odds of lightening hitting where the trail is?

Birdman and I decided to stay together in an attempt to hike through. Just as we got to the edge of where the fire was we saw a sign saying there was a "fire operation" in progress by the NFS (National Forest Service). It said there could be trail closures and to proceed with caution.

Walked through the area and there was several area smoldering and a few on fire. Every now and then a dead bush or tree would ignite and just go up in a ball of flames. There was a lot of smoke but the trail was passable. Got through the burning section in 5 to 10 minutes. I was surprised that we didn't see anyone monitoring the fire . Anyway it was my first time walking through a forest fire and made for some good photo opportunities.

The area after the fire was also pretty amazing as it was covered with tons of wildflowers. The array of colors and varieties was just spectacular. Easily over twenty varieties with splashes over color everywhere.

I hiked on until reaching the Guard Station. Not sure why it is called that - it is a wooden cabin out here by a stream. It is closed and locked but there were several nice tent sites nearby so I set up camp as it was getting late and would be dark soon. I startled a deer just as I arrived here and she ran off.

Birdman showed up a little later and is camping here also. While we were cooking dinner we could hear an owl hooting not far away. Birdman knows his owl calls and said it was a spotted owl. It is kind of nice to hear an endangered species sing you to sleep .

For breakfast I had fruit and some stuff from the hiker box - oatmeal, pop tarts, and a tortilla with peanut butter and raisins. For lunch I had tuna spinach couscous. For dinner I had Bacon Polenta. I used a whole package of bacon and some Parmesan cheese this time and it was a little salty. I had put in sun dried tomatoes too. It could have used more tomatoes and maybe less bacon. I think adding green onions or chives would have made it even better.

Well a helicopter flew by low overhead just after 1 AM. I am guessing they were checking out the fire. It is unusual for them to pass by like that a night.