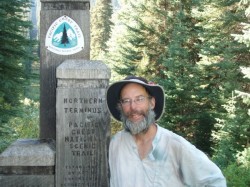 Wow, it's hard to believe I have completed the whole trail.

This was a long, tough, but beautiful day. I woke up early and was on the trail by 5:30 AM. After a few miles I passed Ice Axe, Birdman, Banshee, Jack in the bean stock, etc. as they were just getting up.

Hiked up through Jim Pass and stopped to tip my hat to salute my Dad and brother (both Jims), And then continued on climbing up to Woody Pass. The scenery today was just first rate. Lots of views of stark mountains, deep valleys, clear blue lakes, and woodlands. A perfect mix.

I was a little run down from the cold I have (as do most of the other thru hikers out here) plus from the long mileage yesterday. Today was also a long day but the effects of that didn't hit until about the last 4 miles into Manning Park.

Around 3:30 PM I rounded a corner and saw the Canadian boarder marker at Monument 78 - the official end of the trail. I was surprised to be there so early as I figured 4 PM would be the earliest I would reach it. Ice Axe was there and we took pictures, signed the register, and drank champagne (Ice Axe had a small bottle). The border itself is not in a spectacular area but that made no difference - we were both so happy to be there.

Since it was early enough when I got to the border I decided to go the rest of the way into Manning Park - another 8 miles to spend the night there. As this is where I will be leaving from via bus to head back to home. I was pretty tired and my feet were getting sore but I figured I could push a little hard as it would be my last time hiking for a while. Well I made it in but my feet and legs are very sore and tired. I'm sure a nights rest will do them some good. The boarder has a line of cut trees all along the boarder for as far as you can see - at least until the mountain ridges on both sides.

The ending trail in Washington was just the right way to end the trail. I'm sure it will take me a few days to decompress from this long and wonderful journey. I appreciate all the support and encouragement I received on the trail and I hoped you enjoyed following along via this journal.