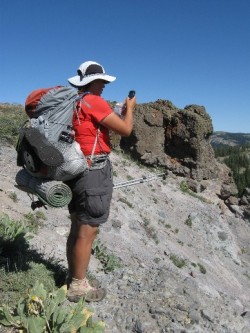 All gear in action here

Camera/Cell Phone
We had a Canon Powershot A590 camera and the Blackberry 8330 Curve on the trail. We chose the camera because it took AA batteries and didn't have some funky charger. AA batteries are easy to replace. We tried to set up a system where we could recharge batteries on the trail but before departing we decided it would be easier to just use disposable batteries. We also chose the camera because it had manual and macro modes. The kind of control we like! It is an 8MP camera and if you happen to get this camera and you want to submit you award-winning photos to the pcta photo contest, then make sure you set it to take photos at its highest resolution. We often had a 2MB card in the camera and sent them home to be backed up. If we'd shot at the highest resolution, we would have gotten bigger memory cards. Towards the end of our journey we started to take more videos. Videos are so much fun so don't forget to shoot some videos while you're out there (get the bigger memory card!). Camera was stored in a freezer ziploc bag (last longer). Extra batteries, cell charger stored in separate ziploc bag.

We also had a Blackberry for our cell phone and web update of our postholer journal. The BB utilizes a micro usb charger and we carried this with us too. We tried to set up a trickle charge with batteries but it would not work. We ended up buying extra batteries for the phone which were real cheap on amazon. We had two batteries with us at a time and would charge them when we got to towns. This worked great and usually I only used one battery in between resupplies. I would only turn the phone on to take photos and write our journal. When there was service, I would upload the journal, if not, I would save it in a word program on the phone and upload when we got to a town. The BB only has a 2MP camera and the photos I took with the Blackberry were only intended for our journal. Because of the low resolution photos that the BB takes, it's easy to upload directly to postholer with no resizing! My family loved seeing the photos while we were out on the trail! Another neat feature of having web access with the phone was that we were able to go on it when we saw fires in the distance and see if the PCT was closed and get status reports on the fires. It helped us make educated decisions about whether to head into the region of fires or go around. We had an 4MB micro-sd card for the phone and this was more than plenty for photo and music storage. I put some tunes on the phone and we would listen to them occasionally. Cell stored in ziploc bag.

Backpack
When we started the planning for our PCT adventure, there seemed to be an obsession for finding lightweight everything. That led us to Golite backpacks and we each got one. But once on the trail, we realized that they weren't working as we had hoped. I just needed a little more support. So, around Kennedy Meadows I switched to the Osprey Exos 58. I fell in love with this pack instantly. It gave me the support I needed while still being lightweight at just over 2 pounds. My only complaint with the pack is that the pockets on the hip belt did not work well. It was very hard to get stuff in and out of the pockets because the shoulder straps come down across the pockets. On the PCT, I often didn't fill the backpack to capacity so when we returned from the trail I got the Osprey Exos 46. The weight of the packet doesn't really matter as long as it feels good to you. Will try it out this year when we return to Washington to finish.

Stuff Sacks
I saw a lot of variations on the trail but I still think the paint stainer bag is the best. It is strong and you can see through it. It makes it easy to find that hard to reach candy bar at the bottom of the bag. They come in different sizes. We used 5 gallon bags for our food and 1 gallon bags for smaller stuff. I only changed out bags one time for the whole trail.