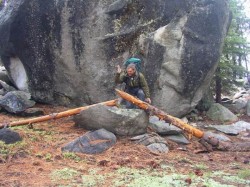 Ounce Madness Has Set In

I put all my "old" gear into my "old" pack, a Dana Designs Terraplane.
The old pack weighs 9lbs empty.. My new pack is 2lbs with a heavy plastic liner bag!
I think thats more than it was new.. must be salt crystals from sweat! Just for the heck of it, I took the old girl out on the horse trails. I think this is the new way to train for me! All that old junk weighs 25 lbs without food or water.
My Base weight now is flirting with 11 pounds.(The gearlist I posted is way off now!) But I can't help but think: I could be lower.
Which brings me to my raging case of: OUNCE MADNESS.
I have been replacing gear like a mad man lately..in fact that little up-tick in the stock market this week.. Yea. That was me, buying gear.
It is a paradox that you can get a perfectly good piece of gear which costs $ 30.00 but to get the same piece that weighs 2 ounces less.. well that one is $ 90.
But just buying new gear does not always reduce packweight alone.
Another and more useful weight saving tactic became apparent when I began to eyeball the trekking poles I had. 11 ounces of Aluminum. So I started thinking. "Hmm.. If I cross drill them they would be lighter."
"Hmm.. If I just chuck them out, I save 100% of their weight." Realizing that I rarely used them anyways and that the lighter load would obviate the need all the more. I chose the latter.
This ultralight philosophy is polarizing.. It is all or nothing.. preferably nothing!
Safety is of course paramount to any decision regarding one's life, or the lives of others who might be charged with my rescue due to me being unprepared.
So there ARE lines I refuse to cross as far as saving ounces are concerned.
I have been in a Sierra canyon early season, when a warm rain fell on the snowpack... It is like being in the barrel of a loaded shotgun. An event I will never forget and one that continues to temper my judgement regarding the issue of gear and being prepared in general.
Yet I cannot grow and move ahead of that event or my previous PCT attempt without facing what I might have done differently or perhaps better.
Gear and packweight aside, It always comes back to free will, decision making, and determination.
It was not the "evil" flood that got me in 2004.. It was MY decision to camp in it's way... And My determination that saved my life.
It was not the heavy boots,or the heavy pack that ended my PCT attempt in 1991.. It was MY decision to use them, and mine to quit due to my lack of determination to stick it out.(Ouch, that hurt. And I don't mean the memory of the blisters and 9 lost toenails).
It is ironic that the "pendulum" of hiking philosophy began to swing that very year(Ray Jardines Book).
And now we are at the opposite end of it's swing with single digit packweights! Well, I guess I am unloading more than packweight..
I am pulling on all I know and everything I have learned in the past 18 years of backpacking. Yet at the same time, throwing out many old ideas.
The thought of carrying 16 lbs of water on some sections of the PCT in Socal, in addition to the multi-day weight of food is always on my mind lately.
Well at least I can train by carrying the weight of my old ways, to strengthen my body, so that I can carry on with some new and lighter ways along the PCT.