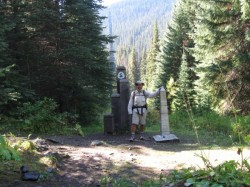 The last 88 miles of trail from Stehekin Washington to Manning Park British Columbia were blessed by sunshine, warm temperatures, and Spectacular scenery. The climb up canyon towards Rainy pass was through much dryer and less brushy terrain. Gone was the "Huckleberry Carwash" through which we had come. Upon reaching rainy pass the trail sprung quite a surprise! As I climbed higher into the North Cascades wilderness the surrounding peaks became increasingly capped by Golden Granite. Soon the treeline was passed and I was threading my way between bare rock and talus slopes. I made a most memorable camp atop a ridge very near the 2600 mile mark. Two sundogs accompanied the sun as it set amid wisps of cirrus cloud. The jagged "teeth" of the North cascade crest appeard black as coal against the orange glow. I had a perfect 360 degree view of the peaks as I sat and munched a dinner of chowmein noodles with sweet and sour sauce! The wind picked up as darkness fell, so I set up the tent, leaving the vestibule open, just as a wind break. I awoke predawn to find a waning moon had risen to illuminate everything once again.. Like a silver sunrise! Despite the wind, this was one of the most epic nights on the trail for me.
The next day I resumed my ridgeline trek in wide eyed amazement. Washington still had surprises in store! There are many crystal springs flowing accross the path. White and gold granite cliffs contrasted with red talus slopes in places. The trail tread itself became smooth, gradual, and relatively easy compared to the previous sections.
You are all going to think I am crazy but, It actually felt like the trail was saying "goodbye" in it's way.
The final night before "border day" was spent in a lush blueberry covered glen next to the trail just 23 miles from the monument. After an early breakfast of fresh blueberries and cereal bars I bid farewell to the fantastic four(Banshee,Jack and the BeanStalk,Salty, and Pimpus Limpus) and Birdman and headed down trail towards Manning Park. The day was full of thoughts and distractions. It is hard to remain introspective when the scenery around you explodes with color and light. The Pasayten wilderness through which I passed was made of golden and green grassy hillsides bordered by steep granite cliffs. A horse packer was camped in one of the gullies between those hills and the morning sunlight backlit the horses and pack stock as they grazed. I climbed Woody Pass and reached the last highpoint of the trail, 7129' an unnamed peak.
Then the trail began it's final long descent to Monument 78 and the Canadian Border.
I reached it around 3 PM and just sat down and looked at it for a few minutes. It barely seemed real. I made a lunch of chowmein noodles and signed the register. It still did not seem real. I openend the bottle of champaign and took a sip.. Okay it's real!
Daylate arrived and we traded congratulations. Soon Maggie and Spec got there as well followed by Birdman.
It is amazing just how quickly the end arrived. I still don't think it has fully hit me. When I got to Manning Park and went into the store I was stull thinking "I need to eat all I can and resupply for the next section". I even caught myself wanting to hoarde the little peanut butter and jam packets in the restaurant the next morning! I guess I have to start eating like "normal" now. No more 1/2 gallon of icecream!
Well, I am currently in Vancouver at the hostel. My flight home is tommorrow morning. It still does not seem real!
Cheers-Iceaxe

Sent from the Trail on my Peek