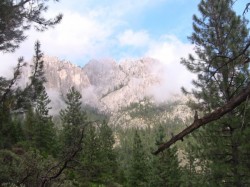 I got a late start, 6:45am, but no one else was stirring. Everything was wet, but the rain had stopped. The cooler temperatures were nice to hike in, but the dampness wasn't. I hiked alone, but the scenery was awesome. It was different then what I had seen up til now. I passed serveral tents in the morning hours and no one was stirring in them. This is how I caught up and passed so many hikers in the Sierras and missed meeting them.

I still had views of the Crags for most of the day though clouds did obscure them at times. At the end of the day, I came to Road 42N17 which had a lot of cars parked. Camped there was Bamboo Bob and Papa Smurf (older gentleman). I continued on for about 1/2 mile to a saddle before camping.