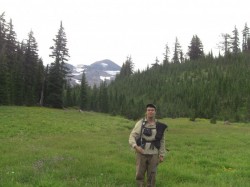 I quickly passed Dutch and Jessica's campsite and realized the lights I had been watching across the meadow last night was indeed theirs. The Obsidian Falls area was beautiful. The area is covered in Obsidian rock and the falls impressive. There were wild flowers blooming in the meadows. I really enjoyed the days hike. The sky started off partly cloudy but the clouds grew thicker as the day progressed.

I arrived at the trail junction to Lava Camp Campground, I found a sign I had been expecting and in fact looking forward to since I left Walker Pass months ago. There was a trail magic sign pointing to the campground with a map to a campsite from Oakie Girl. When I last saw her at Walker Pass, I had said that I would see her in Oregon if I made it that far, and she had said, "Oh, you'll make it." So everytime after that when I was tempted to quit, I said to myself, I can't quit or I'll make Oakie Girl a liar. Dutch caught up and we walked to her campsite and found a note that she was resupplying in town. We weren't surprised since we had run into some hikers who had stayed at the campground last night and told us. We helped ourselves to some soda and chips. Dutch and Jessica moved on to highway 242 to hitch into Bend where they were meeting people. I waited around for Oakie Girl to show up. A couple of other people such as RainDog and Billy passed through but they weren't stopping at McKenzie Pass.

Oakie Girl finally showed up alittle before 2pm and I asked if she was going to the PCT Days in Cascade Locks and if she could take me. She was indeed, and was picking up some people at Timberline Lodge on the way but there was still room for me. We waited around awhile for other people to show up before she drove me down to Sisters to get my bounce box from the Post Office. There we found PartyFoul and LoveShots at the Post Office and we drove them to the market and the Subway before returning to Oakie's campsite. Everyone else that I had been hiking around the last week passed through and then continued on including PartyFoul and LoveShots. It had rained while we were in sisters and the sky still looked threatening so I slept on the picnic table under Oakie's Pavillion so I didn't have to set up my tarp.