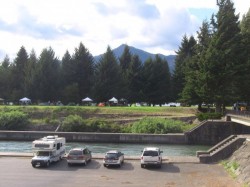 I woke up and Oakie Girl gave me coffee and an omlette. We packed up and headed out around 8am. We stopped in Sisters and I got something from the Bakery. We drove for a few hours to Timberline and picked up Hemlock (not the Muppet one) and Willey. We loaded up truck and moved on to Cascade Locks.

We all set up camp on the island at Marine Park like most of the other people. There were several vendors there such as 6 Moons Designs and even the 6 Million Steps Film Crew. They finally had a trailer done. Many of the people imortalized in some of Squatches' movies were there including the filmmaker himself. I talked to Amish Gypsy whom I met at Sonora Pass who'd jumped ahead after his mom went home and I also saw Rockstar there whom I met briefly at Old Station when she was driving through in her rental car flip flopping around. For most of the day, everyone hung out socializing, eating and drinking. After lunch, I found Big John whom I hadn't seen since we left Old Station together. His feet are still bothering him and he is able to only do about 15miles a day. He had made it to Ashland and a women from Vancouver (Kate) who had been staying there at the hostel drove him up and they had coincidencidentally had set up camp next to me. So we chatted for awhile.

I headed back into town and had dinner at the PCT Pub & Hostel where I asked about leaving my bounce box so I could pick it up during Labor Day Weekend next week when I hiked in. Back at the island, a couple of kegs were brought in while a live band played. I went and got a milk shake from the nearby burger shack while they drew for the lottery of donated gear by the vendors in attendence. I charged up my camcorder battery in the campground bathroom as I listened to the auction from across the water. I then saw Oakie Girl and got my bounce box from her truck. I walked it up to the PCT Pub and left it. Everyone watched Nabor J's slideshow and Squatches' 4th PCT documentary, Walked, and we all turned in. Back at my tarp, I realized that I had lost my cell phone during the day and went back to where Nabor J was packing up the computer used for the video projection and asked if someone had turned one in. Sure enough, it had been and I was saved. PCT hikers are a great bunch. I was soooo relieved and slept well.