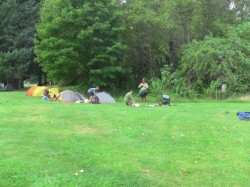 Back to McKenzie Pass

In the morning, I got up and used the shower in the campground but I had forgotten to do laundry (oh well, another week). I said goodbye to Big John, Kate and the others. Big John may continue north from hear due to his slow pace. I met Willey and Oakie Girl and we headed back to Timberline to drop him off. We had looked around from Socks as she had told Oakie Girl she may need a ride back to Timberline, but we never did see her.

We stopped in Sisters and had lunch and I bought my resupply at the market before returning to Oakie's Campsite. Glenn showed up and I went for a short hike. I hiked the short distance from the campground junction to the highway and then checked the lava rock tower observatory that has windows with views of all the major mountains in the area. We had hotdogs and chips for dinner. Glenn started a major bonfire and hung out watching it while drinking beer and talking to himself for half the night. Some people at a nearby campsite also partied into the night and annoyed other campers.