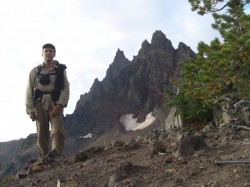 Around 12:30am, it started to sprinkle and then stopped. The sky was mostly cloudy but there were a few gaps in it so I didn't think it would rain very much. But when the drizzle returned, I got up and found a spot under a tree and went back to bed. The tree provided enough coverage to stop the light rain when it happened during the night and I slept dry even though I was still cowboy camping.

After I got moving, I passed Blue Eyes packing up and he caught up to me latter. The early morning was spent going around 3 Finger Jack. At RockPile Lake, I encountered StickyFingers and HappyJoe and we talked some. The afternoon was spent approaching the scenic Mt. Jefferson which still has several Glaciers on its sides. I camped at Jeff Creek because it was suppose to have good camping, but I only found 1 decent spot amid several blowdowns.